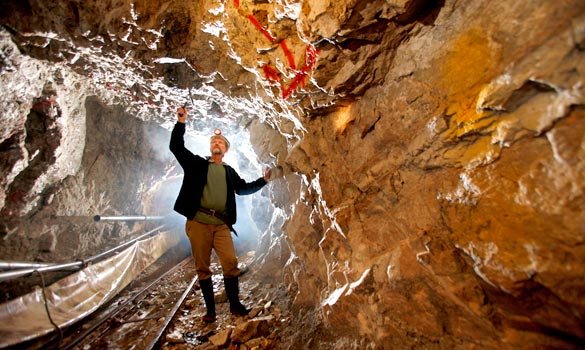 Australia’s dynamic health research facilities and education providers were profiled during the fifth Australia Unlimited MENA campaign using the theme “collaborate to innovate”. For the first time, Austrade’s mining mission was the focus of the roadshow, which promoted bilateral trade, investment, and cultural ties that exist between Australia and the MENA region. Major activities took place in the United Arab Emirates and Saudi Arabia, and there were associated programmes in Kuwait, Qatar, Oman, and Egypt.

Daily News Egypt interviewed Mark Morley, a senior trade and investment commissioner, during his recent visit to Egypt to talk about the new programmes that Austrade is launching in the Middle East.

How does Egypt benefit from Australia’s world class health and mining experts visiting​ the Middle East and North Africa (MENA)?

Australia’s mining sector has built a reputation as a world leader in the Mining Equipment Technology and Service (METS) sector. Australian firms are competitive across the complete mining supply chain, including exploration, mine development, engineering, minerals processing, environmental management, mine safety, research and development, education and training, and community engagement.

What are the new health research and mining projects that will be launched in Egypt? And when?

Australia’s mining companies have a lot to offer the MENA region in terms of developing a broad range of projects beyond the energy sector. In the mining sector, Austrade is working closely with Egyptian entities to identify opportunities for Australian companies in the following projects.

The Black Sand Mineral Project in Egypt is a major project with huge expected revenues and aims at extraction of economic minerals from the black sand in Borollos, Kafr El-Sheikh. The sand will be processed to extract six minerals: ilmenite, magnetite, rutile, zircon, garnet, and monazite. These minerals are considered bases for a hundred types of basic, medium, and high technology industries, including ceramics, paints, high-quality water purification and treatment devices, advanced military industries, and transportation.

Furthermore​, the Australian companies intend to participate in the first round of the international bid for the exploration and exploitation of gold in 2017, announced by the Egyptian Mineral Resources Authority (EMRA)—under the authority of the Ministry of Petroleum and Mineral Resources—in January. There is also the Golden Triangle Development Project.

The proposed projects for the Golden Triangle Development Project include mining projects, such as using phosphate ore and constructing fertiliser factories and other projects to utilise raw materials to manufacture cement.

The project also entails tapping into agricultural lands in the Qena governorate and constructing a number of touristic resorts in Dendara, Laqeta, and Qena Valley. It will also develop resorts and tourist villages between the Safaga and Al Qusayr areas.

Talks between Australian companies and Egyptian stakeholders and concerned state agencies are ongoing, and an agreement is hoped to be reached soon.

Alongside Egypt’s mega projects, what are the other projects Australia is interested in?

Well, the interest comes from where Australia has experience. Our experience fundamentally is in agriculture and mining, and Australia is not interested in infrastructure, nuclear, and construction projects.

What other projects has Austrade launched during the current year in the health sector for MENA countries?

Another focus made in the current year was how Australian healthcare service firms can help MENA countries cope with growing demand. Australia’s proven expertise in healthcare is well positioned to assist the MENA region as the public and private sector work to develop a local medical tourism industry and try to prevent the spread of lifestyle illnesses such as diabetes and cardiovascular disease.

What is the size of the GCC’s spending on the health sector?

By 2020, spending in the Gulf Cooperation Council (GCC) countries alone on healthcare will reach $69bn. It is estimated that by 2020, there will be a shortage of 15,000 physicians and 1.8 million nurses and midwives. So the need to enhance skill levels in the healthcare sector also offers clear opportunities for Australian education and training providers.

What is the expected size of trade exchange between Egypt and Australia in 2017?

Egypt and Australia shared a $554m two-way trade in merchandise in 2015-2016, including $37m worth of imports of trade in services, which was 5.7% higher over the previous year.

We export mostly food and agriculture products; most of the products are wheat, meat, and dairy.

Do you expect growth in Australia’s investments in Egypt in 2017? If yes, please mention the amount of current and expected growth?

In 2015-2016 the total Australian investments in Egypt was$106m. Egypt is a country with a huge wealth of untapped natural resources, and it enjoys a strategic location in the Middle East and the roads of international trade. These are key elements for investment attractions. We have good relations with the General Authority for Investment and Free Zones (GAFI) and are watching closely the developments in the investment environment in Egypt. We hope in the near future that Egypt may be able to attract leading Australian investors in the mining, health, and education sectors, as well as food and agriculture.

Shall we expect an Australian ​delegation of businesspeople and companies to visit Egypt to discuss investment opportunities? If yes, please tell us the number of these companies, and when is the visit scheduled?

Furthermore​, we have regular and ongoing contact with delegations of businesspeople coming into Egypt and the region.

What are the challenges that face Australian investments in Egypt?

We are aware that Australian companies raised in the past a number of issues regarding mining regulations, particularly around mining investments. We have had a number of exploratory meetings with EMRA and other ministries regarding Australia’s capability in mining, and our willingness to assist with the regulatory and investment aspects of Egypt’s legislation around mining.

What is your opinion regarding the investment climate in Egypt after the recent reforms?

We understand that the reform laws are still under consideration by the relevant Egyptian authorities and the parliament. We will study the Investment Law closely and look for the opportunities relevant to Australian companies. We are particularly interested in what this may mean for mining companies.

In your opinion, does the EGP flotation have a positive effect on investment?

The EGP flotation is certainly a positive step. However, it is a challenging economic move that adds to the pressure on the Egyptian management and local Egyptian market.

Has Egypt provided any privileges to boost Australian investment?

Given the now increasing stability of the political and economic situation in Egypt, and refreshed support from the Australian exporter community, Australian businesses are now coming back to Cairo in greater numbers. Australian companies such as Worley Parsons and Gourmet Egypt are making in-roads in their industries, and Australian gold mining company Centamine is the largest mining outfit in Egypt.

What are the opportunities for Australian companies to invest in Egypt?

Egypt has a significant challenge to improve its education system; both the elementary and secondary education systems require overwhelming improvements—specifically enhancing the quality of teaching and teachers, improving the infrastructure of dorms and expanding the number of occupancy in them, and improving advanced research protocols. Thus, opportunities for Australian providers exist in research collaboration, curriculum development, professor exchange programmes, career development consultancies, and accreditation consultancy.

The country is dependent on imports across a range of key food and beverage commodities to meet the needs of its growing population. Currently, Egypt imports 50-55% of their wheat requirements, which is expected to increase as a result of the high growth of population versus the flat increase in production rates. Food consumption is expected to grow at a double-digit annual rate in both absolute and per capita terms to 2019, although this will be partly fueled by high inflation. Meat and livestock exports to Egypt are robust and continue to play an important part of Australia’s export mix. Water and sanitation are areas of increased focus and cooperation with private and public organisations in Egypt.

Aside from its gold deposits on offer, estimated at 6.7moz (million ounces), Egypt is home to an abundance of mineral resources, including phosphate, iron ore, and kaolin. Egypt also has 48 million tonnes of tantalite (fourth largest in the world), and 50 million tonnes of coal. Demand for mining equipment, training, technology, and services (METS) will also invariably increase as both the government and private sector pursue investment in mine sites. Australia’s mining legislation and mining code will be well suited to Egypt’s environment, as well as our royalty system.The Egyptian government has embarked on an ambitious investment attraction exercise.

Wages account for 55% of health financial allocations in next budget

Is working from home out of fashion?

EBSC asks cabinet to exempt their equipment from taxes and customs

Peter Linford Interview: There is still room for growth