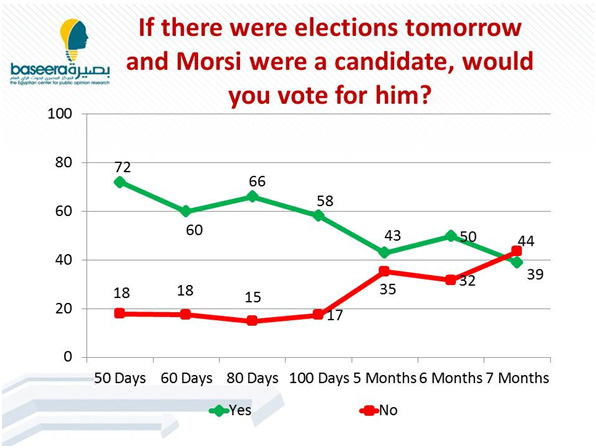 On the second anniversary of the 25 January Revolution, Egypt witnessed a number of events that had a significant impact on the country. By the end of January, the President’s seventh month in office, the Egyptian Centre for Public Opinion Research (Baseera) conducted its periodic poll to explore the extent to which the president’s performance meets with the approval of the people.

The results also indicate that young people are less satisfied with the president’s performance than older age groups. The lowest percentage of satisfaction appears among Egyptians with university or higher education, where the approval rating is 33%, compared to 56% among those with less than intermediate education. The approval rating also declines to 36% in urban governorates compared to 64% in Upper Egypt and 52% in Lower Egypt.

As in previous polls, the following question was asked: “If there were elections tomorrow and Morsi was a candidate, would you vote for him?” The results show that the percentage of those who would re-elect Morsi has reached its lowest level since he took office. Only 39% stated that they would re-elect him compared to about 50% in his sixth month. The percentage of those who will not vote for the president, 44%, is the highest since he took office and has for the first time since then, surpassed that of those who will vote for him.

The participants were asked if they had listened to or watched President Morsi’s speech, following the events that took place in Egypt on the second anniversary of the revolution when he declared a state of emergency in the cities of Suez, Ismailia and Port Said. Around 72% responded that they had indeed either listened to or watched the speech which Morsi gave to the nation following the violence.