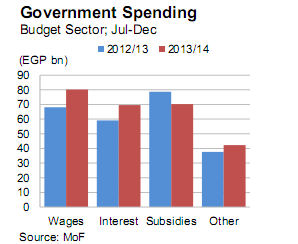 The current macroeconomic climate in Egypt points to a likely recovery over the next two years, according to a 12 February report by international credit rating agency Fitch, but the pace of growth will remain sluggish. The agency has maintained its B- rating for the country, as well as its recently earned Stable outlook.

Supporting its stance, Fitch cited “tentative improvements in political and economic stability” amid large inflows of funds from the Gulf following the ouster of former president Mohamed Morsi in July 2013; ongoing crackdowns on opposition activity by security forces; and the recent passing of the 2014 Constitution, ticking off another box on the interim government’s democratic roadmap.

As a primary weakness, the report pointed to the deteriorating state of Egypt’s public finances, with special emphasis placed on the budget deficit, which reached 14.1% of GDP during the 2013 fiscal year, “the largest of any Fitch rated sovereign”. Such budget woes, the agency said, stem largely from a combination of lower revenues – largely on poor tax collection, which it said the interim government planned to address through implementation of a VAT and other property tax reform – and higher expenditures.

Added to this expenditure are the two parts of the interim government’s recent economic stimulus package, with tranches in September and February tallying EGP 29.6bn and EGP 33.9bn, respectively.

The report stressed the increasing difficulty of financing the rising deficit, with the government bearing a debt of 89.2% of GDP at the end of FY 2013 and losing its status as a net creditor in the same year. Meanwhile, net foreign reserves have fallen from almost $36bn on the eve of the revolution to $17.105bn at the end of January, enough to cover only three months’ worth of imports. While the aforementioned inflow of Gulf funds may help ease this pressure, the report cautioned that “the underlying reserve burn continues despite foreign exchange rationing”.

Another macroeconomic concern the report cited was “above peer” levels of inflation, which it said stemmed partly from supply chain bottlenecks.

Despite the challenges, Fitch expects growth to pick up over the next few years given “reduced political instability, greater access to foreign exchange, and fiscal and monetary stimulus”. However, although the agency foresees two years of recovery, such growth should be slow and unlikely to return to 2010 levels even by the end of 2015.

On 2 January 2014, Fitch raised the outlook on Egypt’s Long Term Foreign Currency rating of B- from Negative to Stable, the first time out of Negative since the 25 January Revolution in 2011. In the years since, Egypt’s ratings have been downgraded five notches amid periodic spikes of political and economic instability.