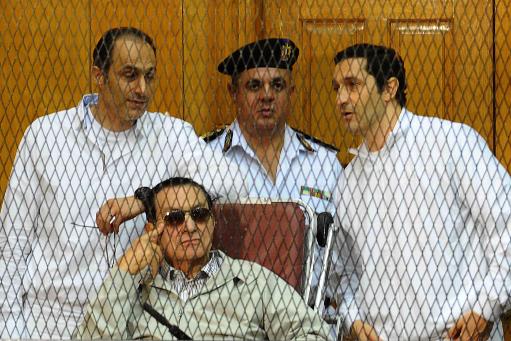 Mubarak and his two sons Alaa and Gamal are charged with taking almost EGP 126m from the presidential palace budget and using the money for construction and development of family-owned assets.

They are also charged with forging official documents and willfully damaging public property.

The prosecution had added four other defendants to the case, charging them with aiding the Mubaraks in embezzling public funds.

All the accused denied the charges, while the prosecution representative demanded the maximum penalty prescribed by law.

The court refused to let volunteer lawyers defend Mubarak because they did not have permits, according to state-owned Al-Alharam.

Alaa and Gamal are also on trial with their father for alleged murder and corruption, along with seven of Mubarak’s former security commanders, including his former Minister of Interior Habib Al-Adly.

Mubarak, 85, has remained in a military hospital in Cairo since he was freed from prison in August after the maximum pre-trial detention period expired.

He had been convicted of involvement in the murder of protesters during the 2011 uprising that forced him from office, but a court ordered a retrial last year on technical grounds.