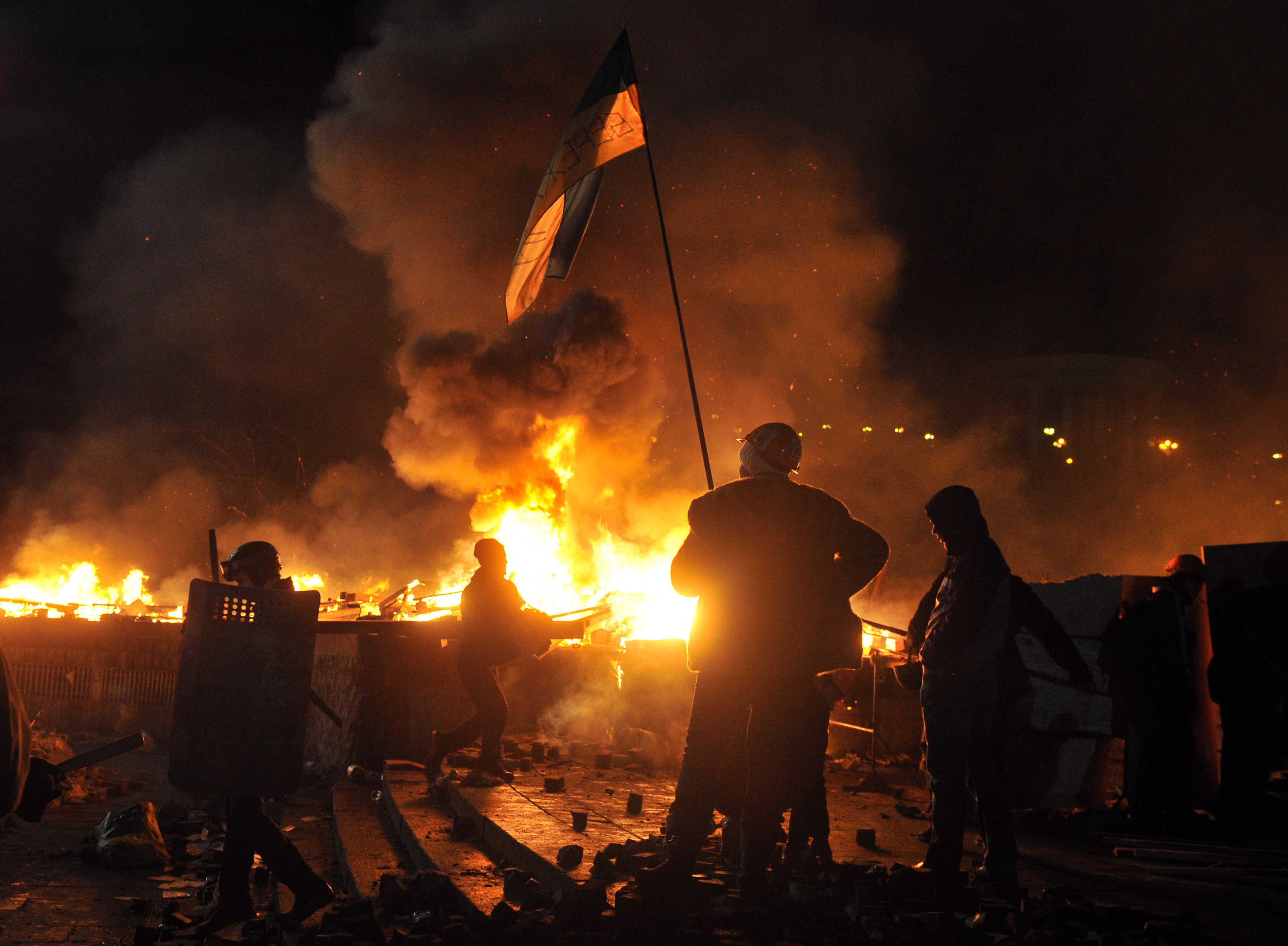 AFP – Protesters braced Wednesday for a fresh assault by riot police in central Kiev after a day of clashes left at least 25 people dead in the worst violence since the start of Ukraine’s three-month political crisis.

As dawn rose over Kiev’s battered city centre, protesters hurled paving stones and Molotov cocktails at lines of riot police that had pushed into the heart of the devastated protest camp on Independence Square.

Overnight, security forces rained a volley of tear gas down on thousands of demonstrators as they ramped up attempts to clear the square where protesters have set up a sprawling tent city during three months of protests.

Swathes of the tent encampment have already been destroyed by fire and flames poured out of the windows of a gutted building on the square.

A wall of smoke and flames rose up into the dawn sky as the encampment continued to burn, while lines of police and protesters – both clutching shields and wearing helmets and body armour – faced off in an apocalyptic scene.

The surge in violence, in a country torn between a future allied to the West and to Russia, sparked alarm in Europe and the United States.

But a defiant President Viktor Yanukovych rejected calls to halt the ferocious assault on the bloodiest day since protests broke out in November, when he ditched a pact with the European Union in favour of closer ties with former master Russia.

In an address to the nation as clashes raged, he said the opposition had gone too far and accused them of trying to oust him.

“The leaders of the opposition have disregarded the principle of democracy according to which we obtain power through elections and not on the street … they have crossed the limits by calling for people to take up arms,” he said, adding those responsible would face the law.

Kiev was effectively in lockdown as authorities halted the city’s metro system and limited road traffic coming into the capital.

Ukraine’s health ministry said 25 people had died in the clashes since Tuesday morning and another 241 were in hospital.

“If we hold on until morning, we have a chance to make it out,” one protester said.

As the turmoil intensified, US Vice President Joe Biden phoned Yanukovych to express his concern and urge him to “pull back government forces and to exercise maximum restraint.”

But opposition leader Vitali Klitschko, fresh from a meeting with the president, said: “Yanukovych said that there is only one option… to clear Maidan (Independence Square) and that everyone has to go home.”

“This is a small island of freedom,” the former boxing champion said, declaring the protesters were “not going anywhere”.

Another opposition leader, Arseniy Yatsenyuk, told Kiev’s Kanal 5 opposition television channel: “The president suggested that we surrender. We will stay here with the protesters.”

UN chief Ban Ki-moon called for restraint and dialogue, while German Foreign Minister Frank-Walter Steinmeier warned that the violence could lead to EU sanctions against those responsible.

But a top Russian lawmaker said Ukraine – which is divided between a pro-EU west and a pro-Russian east – was on the brink of a civil war that he claimed had been inflamed by the West.

“I consider that a significant amount of responsibility for this falls on the West and Western politicians, who are constantly putting pressure on the Ukrainian authorities,” Alexei Pushkov told Russia’s Interfax news agency.

The violence erupted after the crisis appeared to have abated in recent days, with both sides making concessions that saw protesters vacate Kiev city hall on Sunday after being granted an amnesty deal.

But on Tuesday, some 20,000 anti-Yanukovych protesters clashed with police outside parliament as they rallied for lawmakers to strip the president of a raft of powers.

After threatening “grave actions” if the unrest did not cease, police first stormed the square in the early evening, warning women and children through loudspeakers to leave as they began their “anti-terrorist” operation.

But some 25,000 people, many of them wearing makeshift body protection and wielding iron bars and bats, remained to defy the riot squads.

The violence also spread to the west of the country, where thousands of protesters overran public buildings, including the police and special forces’ headquarters in the historic city of Lviv, where they took control of an arms warehouse.

In Ternopil, protesters lobbed Molotov cocktails at a local government building before occupying it, while similar scenes played out in the city of Ivano-Frankivsk.

Prosecutor General Viktor Pshonka warned he would seek the “harshest punishments” for those deemed to have been behind Tuesday’s violence.