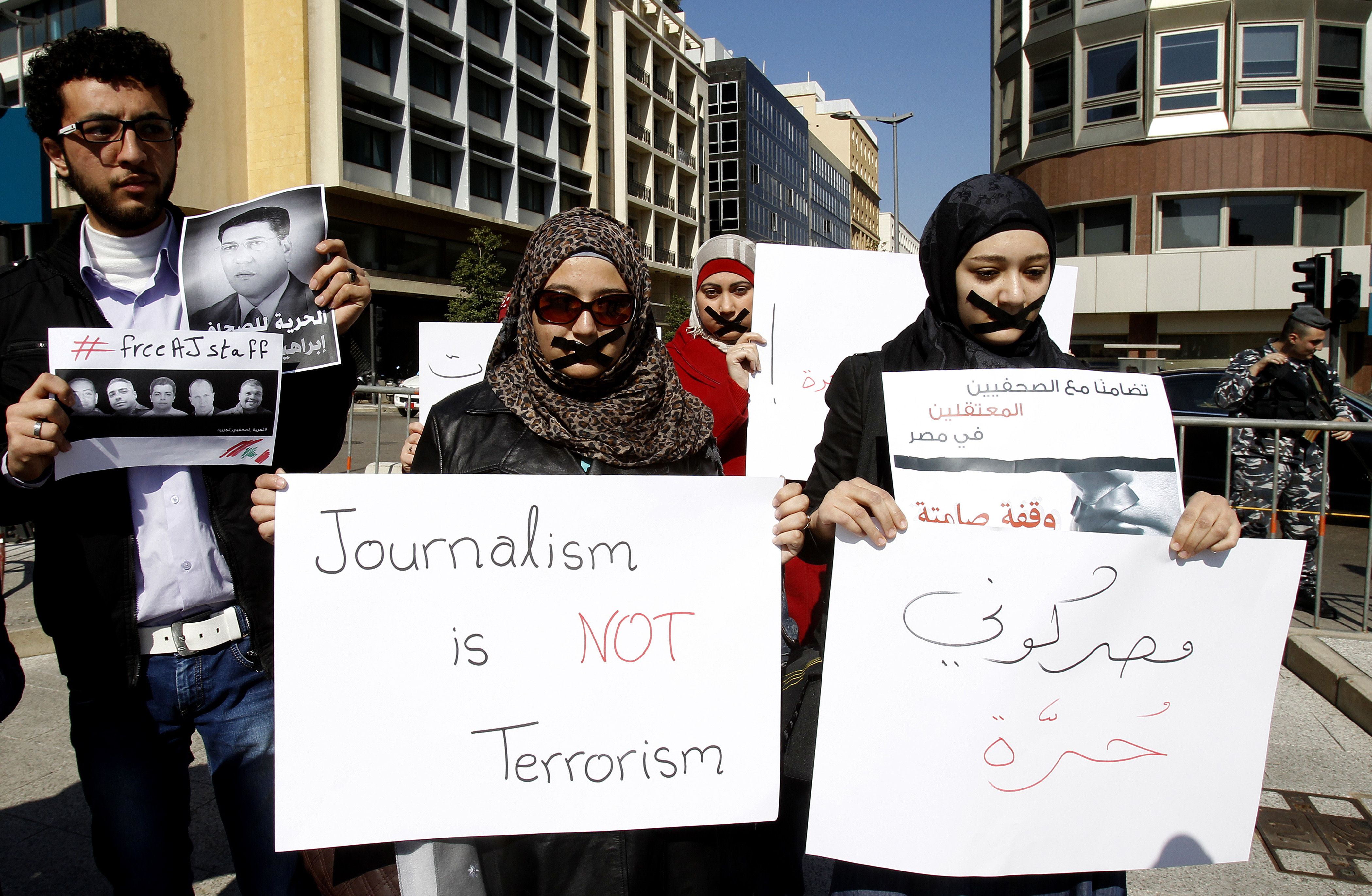 The British National Union of Journalists (NUJ) demonstrated in front of the Egyptian embassy in London on Tuesday to protest the ongoing persecution of journalists in Egypt.

The demonstration comes a day before 20 journalists—nine of whom work for Al Jazeera—stand trial in Cairo for charges relating to terrorism and spreading false news. Two of the Al Jazeera journalists indicted, Sue Turton and Dominic Kane, are British citizens.  Neither Turton, Kane, nor many of the other defendants are currently in Egypt.

“We support all of the journalists equally,” said Frances Rafferty, of the NUJ.  “We are against the ongoing crackdown against media freedom in Egypt.”

The arrests and detention of journalists in Egypt has garnered international ire. The United States State Department called the charges against the journalists “spurious”, while the White House, the European Union, the United Nations and the Australian government have all expressed their unequivocal condemnation, and called for the journalists’ release.

On 12 February, 15 members of the US congress drafted a letter to Secretary of State John Kerry urging the US executive branch to petition for the release of imprisoned journalists in Egypt.

“We recognise that Egypt is struggling to find its identity. The struggle will be hard and it may be long,” read the letter. “While there are different views on how Egypt might best move forward to an inclusive, peaceful, and democratic future, we all agree that no Egyptian government can be successful without a free press.”

Dubbed the “Marriott Cell” by the prosecution, the main charges centre around three Al Jazeera journalists arrested on 29 December: Canadian-Egyptian bureau chief Mohamed Fadel Fahmy, Australian correspondent Peter Greste, and producer Baher Mohamed, an Egyptian national. Fahmy and Greste were arrested at the Zamalek Marriott where they were using two rented suites as a base of operations, while Baher was arrested the same night at his home in suburban Cairo.

Greste’s father has recently launched an online petition urging for his son’s release.

“We sincerely believe [Greste] has done nothing wrong and is not a supporter of terrorism. We humbly request you show compassion for Peter and his colleagues and ensure their early release,” said the petition.

Yemeni journalist Firas Shamshan was arrested and detained while filming at the annual Cairo Book Fair in early February amid the ongoing press crackdown. On Tuesday his detention was renewed for an additional 15 days while the prosecution investigates claim that he was “using a camera” to “spread false news and rumours that are likely to disturb public peace”.

Other recent reports by the CPJ stated that six journalists were killed in the line of duty in Egypt in 2013, while another 71 journalists were either detained or assaulted. Last year Egypt ranked among the top ten jailors of journalists in the world.