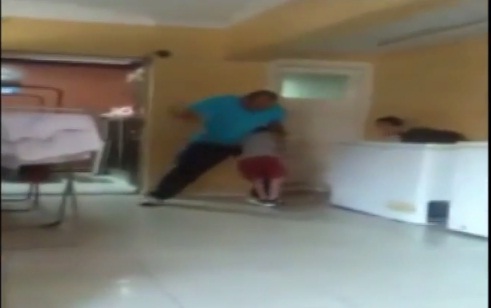 The wife of an orphanage manager released a video Sunday of her husband torturing children in the Mecca Al-Mukarama Orphanage, which he manages in Cairo’s Al-Haram neighbourhood.

“You cannot do anything in this country until you have evidence,” said Ilham, wife of the manager in question, Osama Mohamed Uthman.

In the video Ilham took, Uthman beats and spanks a group of 13 children, mostly under the age of 10, one by one. The prosecutor general’s office has begun investigations into the case, according to a Monday statement.

The prosecutor general ordered the immediate arrest of Uthman and his referral to the Cairo Criminal Court after investigations. The sentence for the crimes Uthman is accused of could be up to three years in prison, according to the statement.

Ali AbdelRahman, governor of Giza, decided Monday to dissolve the board of directors for Mecca Al-Mukarama Orphanage after the reports and condemnations of the torture video, which went viral on both official and social media.

He also decided to assign a temporary board of directorates to manage the orphanage for next three months until financial and administrative turmoil is settled, according to the Egyptian state news agency, MENA.

AbdelRahman said that the children are to be moved to a more credible orphanage as soon as investigations are over.

Ilham said she first received licence to open an orphanage in 2006, and by 2007 she was running the orphanage without her husband who was not living in Cairo at the time. In this orphanage, she was to raise 10 boys and 10 girls.

Four years later, her husband was back in Cairo. “When he came back,” Ilham said, “as the husband, he began taking control of all affairs related to work and the orphanage.”

As her husband took more responsibility, Ilham was no longer allowed to interfere nor visit the orphanage as much. This is why it took her a while to notice that the torture took place, she said.

She claimed that when they were younger, her husband did not beat them. When they got older, her husband began beating them for playing and moving around too much. “Later, I began hearing about the torture from the children and from the caretakers.”

Ilham said that while many have accused her of taking part in her husband’s crimes and creating a cover for him, she was unable to do anything without first providing evidence. “I was afraid of him and the employees were afraid of him, and I was unable to take any action,” she said.

In one instance Ilham recalled, one of the donors to the orphanage walked in to see Bassem, one of the children with his hands tightly tied. The donor went to file a complaint at the Ministry of Social Solidarity but Uthman immediately forged medical assessments claiming the children were in good health and claimed Bassem’s hands were tied “to protect him from playing with electricity”.

Ilham further said her husband used to beat their own three children as well, the oldest being 18 years old.

Minister of Social Solidarity Ghada Wali said on her Facebook page: “Our problems are plenty and the road ahead is long, but we will surely succeed with the will of God and the persistence of the Egyptians.”

Wali claimed that “regular visits are made to orphanages” and “there will be a supervisory system send up and policies to raise quality of this supervision [on orphanages].”

According to the Egyptian Coalition for Children’s Rights, violations against children’s rights in Egypt include: security officers’ use of children as human shields, cases of arbitrary arrest of children, widespread child labour, domestic and school violence, and more.