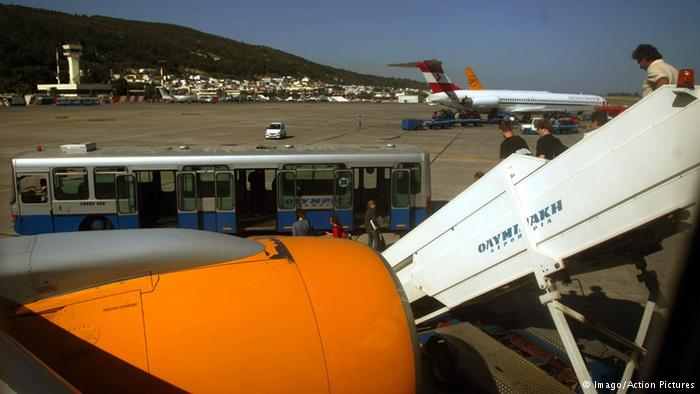 German airport operator Fraport and a Greek partner company owned by one of Greece’s biggest business magnates are to manage 14 airports in Greece under contract to the Greek government. Some details remain sketchy.
A consortium majority-owned by Fraport, Germany’s biggest airport operating company, and minority-owned by Greek conglomerate Copelouzos Group, announced on Monday it had signed a deal with the Greek government’s privatization agency, Hellenic Republic Asset Development Fund (HRADF), for a 40-year concession to operate 14 regional airports in Greece.

“The project underscores the extensive know-how that Fraport will be able to provide at these 14 aviation gateways, which are vital for Greece’s economy and in particular its huge international tourism sector,” Fraport Chairman Stefan Schulte was quoted as saying in a corporate press release issued by the Fraport-Copelouzos consortium.

The founder and chairman of Copelouzos Group, 65-year-old Dimitris Copelouzos, said “the cooperation of the two companies is a guarantee for successfully supporting tourism as the heavy industry of Greece.”

The privatization of Greece’s airports – at least in terms of their operation – was among the terms demanded by the country’s European creditors to provide a bailout to its government, over the early resistance of its young prime minister.

Three of the airports are on the mainland – the biggest in Thessaloniki, Greece’s second city, and the others in Aktio and Kavala. Eleven others are on Greek islands, including Crete, Corfu, Kefalonia, Kos, Mitilini, Kykonos, Rhodes (pictured at top), Samos, Santorini, Skiathos and Zakynthos.

The Greek government will retain ownership of the airports. The concession to operate, maintain, and improve them has been assigned to the Fraport-Copezoulos consortium in exchange for the latter’s payment of an initial concession fee of 1.234 billion euros ($1.355 billion), to be paid on the deal’s formal closing, expected in autumn 2016.

In addition, the consortium has committed to a fixed annual concession fee, initially set at 22.9 million euros. It has also committed to investing 330 million euros by 2020 in modernizing and expanding the airports, with additional investments to follow in subsequent years to maintain and expand their capacity as needed.

The joint press release by Fraport and Copelouzos Group said that “Fraport will have a clear majority share in the concession companies, while Copelouzos will hold the remaining stake.”

DW on Monday asked spokespeople at Fraport and Copelouzos for clarification of the specific sizes of the ownership stakes in the consortium held by each company, and about the specific operational role that Copelouzos would play, but no details were disclosed.

A Fraport press spokesperson refused to divulge what percentage of the consortium was owned by each of the two partners, saying it was an “internal matter.”

A spokesperson at Copelouzos Group told DW she did not know the size of the stake in the consortium held by the Greek company. She said the company would have an active role in the management of the 14 Greek airports, rather than a purely passive role as an investor, but was unable to provide details of the specific nature of its contribution. She said the details would be worked out over the coming months, in time for the consortium’s taking over management of the airports in autumn 2016.