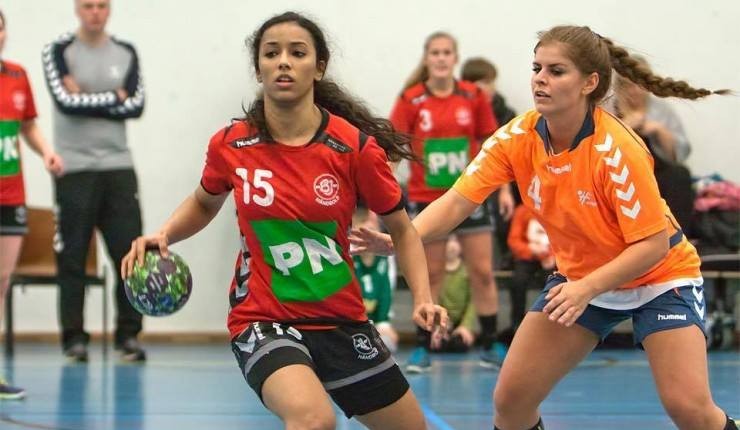 Rehab Gomaa, 21, is the youngest female handball player in the history of Egyptian handball. Gomaa started at Nasser’s Club but when the club frizzed its activities, she moved to Shabab El-Sahel sports centre.

Her dream became true and she finally joined Al-Ahly SC and then moved to Egypt’s National handball team. With Egypt’s national junior female handball team in 2011, she participated in the African Women’s Junior Handball Championship in Burkina Faso.

She then moved from the juniors’ category to the first team category in Egypt’s national female handball team and with the first team, she participated in the African Women Handball Championship in Morocco in 2012.

In these regards, Gomaa said the participation of Egyptian female handball player Marwa Eid gave her hope to join Egypt’s national first team and to participate in international championships abroad.

Her high level of performance led her to be part of an Algerian club called Hawa Saida in 2013, where she had a strong presence in the Algerian Handball league. Afterwards she moved to a Danish club Finisil, which she left because in four consecutive matches, she was confined to the bench. She then went on a loan to Bonslo Club and helped the team win four matches and won “Best Player” in one of these matches.

An important participation for Gomaa in Bonslo in 2015 was her leading the team when it won against the Danish club Halfly (32-29) in the Danish League for the second category.

Gomaa aims to be among the best five female handball players worldwide.

Gomaa is from Aswan where it is not common for women to succeed in sports, especially on an international scale. From the beginning of her sports career, Gomaa’s mother encouraged her. Bu they both had hide the issue from her father. Her father found out she was practicing when he was reading Al-Ahly SC’s magazine. Witnessing her success, her father then encouraged her to successfully continue on her path.

Her ex-fiancée gave her an ultimatum, when he gave her the choice to either stay with him or to travel to Algeria without him. She chose to go to Algeria with her dream and she travelled to build professional career.