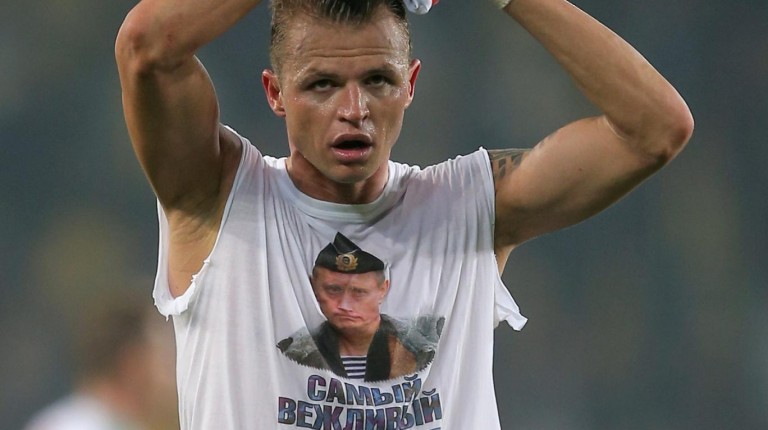 The t-shirt was emblazoned in Russian words, reading: “Vladimir Putin: The most polite president.”

Fenerbahçe managed to win 2-0 during the round 32 game, which was played at Fenerbahçe Şükrü Saracoğlu Stadium.

Turkish media heavily criticised Tarasov’s t-shirt sign, calling it an attempt to provoke Turkey or Turkish fans. Turkish newspapers and TV channels blacked out the t-shirt’s message during the coverage of the game.

Meanwhile, Tarasov spoke to the Russian media, saying: “It’s my president. I respect him and decided to show that I’m always with him and prepared to give my support. What was written on that shirt was everything that I wanted to say.”

When he was asked about provoking Turkey, he responded saying: “I did not mean to provoke, smart people will understand that it was not the intention.”

The FC Lokomotiv Moscow player faces possible ban for at least 10 games for backing his president, as the European football association UEFA prohibits any political statements during matches.

Tension have been high between the two nations after a Russian Su-24 aircraft was shot down near the Syrian-Turkish by a Turkish F-16 last November. Officials in Turkey claimed the Russian aircraft had entered Turkish airspace, which Russia expressly denied.