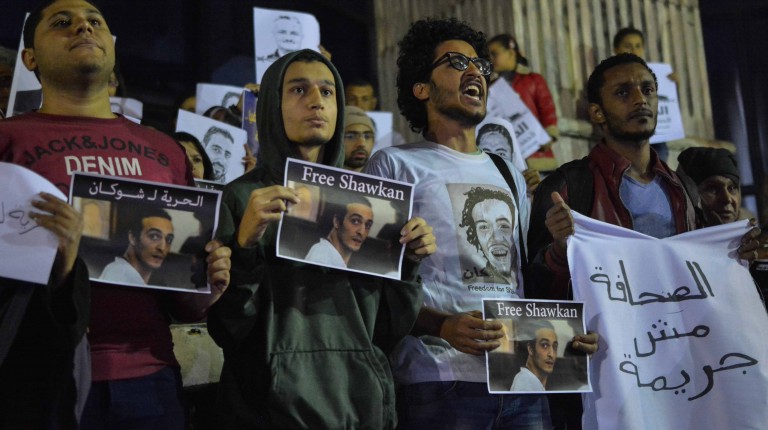 This follows the storming of the journalist’s house on Tuesday at dawn, as the police claimed to be searching for him despite him being held in their custody for over a year.

“They broke the gate of the house, stormed in, and searched it at 3.00am on Tuesday,” Al-Safty said. “By 9.00am, we found out he has been taken into solitary confinement after his prison cell was searched and his belongings were confiscated, including his books.”

Al-Safty further claimed that she did not attempt her usual Monday visit to Tora prison as El-Battawy is banned from receiving visitors for a month.

El-Battawy was arrested in June 2015 over alleged charges of belonging to the outlawed Muslim Brotherhood. He was working for state-owned news outlet Akhbar Al-Youm and is a syndicate member; he has not yet stood trial.

Meanwhile, the family of detained photojournalist Mahmoud ‘Shawkan’ Abou Zeid had claimed last week that they did not know his whereabouts after being informed by Tora prison officials that he was transferred to another facility in the Tora complex.

Shawkan’s brother Mohamed confirmed the transfer. Speaking to Daily News Egypt on Monday, Mohamed said that he visited Shawkan on Thursday and that his father saw him the Monday before.

He described the long, hectic process of prison visits and said: “I do not know why Shawkan was transferred, but he is not very happy with the new cell because it was dirty and crowded.”

Shawkan has been held in pre-trial detention since August 2013, over charges that include belonging to the Brotherhood and engaging in violent incidents during the bloody security dispersal of the Rabaa Al-Adaweya sit-in.

Trial of Shawkan, 738 other defendants adjourned to 7 February in “Rabaa dispersal” case

Trial of Shawkan, 738 other defendants adjourned to 17 January

Hold on to my dream, don’t leave the cameras: Shawkan’s letter from prison

I’m a photojournalist with no affiliations whatsoever: Shawkan to judge

After 4 days of solitary confinement, Shawkan returns to his cell

Journalists to rally at Press Syndicate over imprisonment