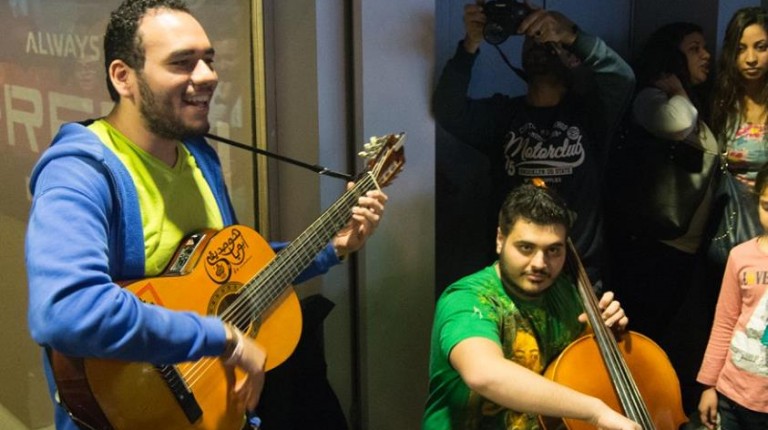 Picture a portrait of a woman working on a handmade carpet, while she’s pulling the fabric in order to shape the design of the carpet while another features women shaping pottery pots, all along a third one that visually describes the story of women sewing Kiliim. These were all sides of the Tasmemha (Her Design) exhibition.

Tasmemha is a photography competition that aims to revive traditional women-made handicrafts that have been disappearing. The competition is also aimed at empowering people who are struggling against the competition of factory-produced products.

The competition is organised by the Zatek museum (the Digital Museum of Women), in association with the Madad Institute and Tahrir Lounge.

On the walls of downtown’s Tahrir Lounge, the portraits taken by both professional and amateur photographers were displayed. Each captures a different form of traditional handicrafts on the brink of extinction made by women from different governorates.

“This is more than just a competition,” said Yasmine Ibrahim, general manager and founder of Zatek. “This is our way of showing that these handicrafts may no longer exist in the future, despite the fact that their owners fight hard to fit in the world of technology and manufacturing.”

The exhibition aims to document the current status of Egypt’s hidden handicrafts while people are still practicing it, Ibrahim said.

“We wanted every photographer to capture the handicraft talents from their hometown because people feel more comfortable when working with someone who looks like them and comes from a similar culture,” Ibrahim explained.

In all, 70 portraits were showcased. The judges selected those which show a different aspect of the handicrafts in Egypt. Despite the fact that most of the participating photographers are amateurs, the pictures revealed a hidden side of Egypt in such high quality that you could be forgiven for thinking they were seasoned professionals.

“We had doctors, engineers, and even teachers who never let their professions lure them away from their passion for photography,” Ibrahim said. Many of the portraits featured depicted women practicing a wide variety of handicrafts, including some who were traditionally only made by men.

“We received pictures of women working as carpenters, others who worked as potters, and what touched my heart the most was those who made papyrus, especially given that this industry is the one fighting the hardest to survive,” Ibrahim added.

The honour of best photograph was awarded to Asmaa Gamal. In her picture, Asmaa captured the life of the few remaining women that sew carpets in Marsa Matrouh. In the picture, she focused on one woman with the rest of the carpet makers surrounding her.

“That lady is called Ola, and she lives in a village near the centre of Marsa Matrouh,” Gamal recalled. “Ola was so passionate about her handicraft and she talked about it with love as I have never seen in my life.”

“Despite modernisation efforts that have effectively decimated the handmade carpet industry, she was the only one among her group that fought to hold on to their heritage and identity by refusing to let the craft die,” Asmaa said. “That is why I decided to photograph her.”

The exhibition also put on display some of the handmade products made by these women, in order to help the public personally explore their world and see the results of their work.

Committee formed to follow up on establishment of Chamber of Handicrafts