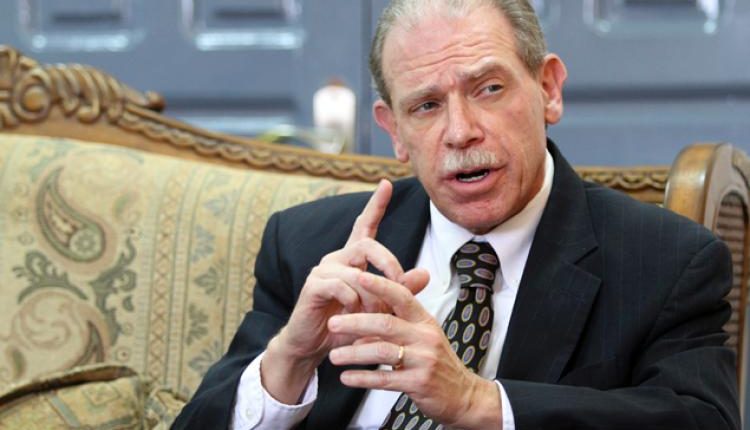 Washington—Former US Ambassador to Yemen Gerald M. Feierstein said that the Trump administration has not found any evidence yet to designate the Muslim Brotherhood (MB) as a terrorist organisation.

“There is a clear difference between those individuals belonging to the group [the MB] who commit heinous crimes and the group itself, which no one has any evidence against it,” Feierstein said.

The ambassador added that the Trump administration has demanded that the Congress and its various institutions investigate this issue, but they could not find any evidence against the group.

According to Feierstein, the Muslim Brotherhood has successful experiences in many countries, such as Tunisia, Yemen, Jordan, and Morocco, where they peacefully participated in decision making. Therefore, “we cannot generalize some of the individuals’ mistakes and violations that occur in Egypt.”

He stressed, “Egypt could not be isolated, nor can we get rid of the brotherhood completely.”

Feierstein pointed out that the Trump administration differs from Obama’s. The bilateral relations now witness more cooperation and support for Egypt’s anti-terrorism efforts in the Sinai Peninsula. Moreover, both Egyptian and American administrations share close visions regarding achieving stability in Libya, which is of great importance for Egypt and its national security.

“The Congress may disagree with the White House over certain matters in Egypt and they observe some negatives in human rights and civil society, but there is a general agreement on the importance of strengthening Egypt’s capabilities and security system,” according to Feierstein.

“The US administration is interested in the issue of terrorism, Iran, and the Palestinian-Israeli conflict,” Feierstein said.

He predicted that the US ground forces may enter Syria to strike the Islamic State (IS) group, in addition to the current airstrikes carried out by the US-led international coalition against terrorist groups in Syria and Iraq.

Moreover, the US administration is working with other parties to help Syrian refugees to return to their homes after they had fled the country due to terrorism and violent acts carried out by the Assad regime.

Feierstein revealed that some US officials have visited the Gulf states recently to discuss the development and strengthening of their defences to curb Iran’s expansion of influence in Lebanon, Syria, Iraq, and Yemen.

He added that the US administration seeks to find a solution to the Palestinian issue, noting that the Arab peace initiative is still on the negotiating table. He further added that Trump has discussed the Palestinian-Israeli conflict in his meetings with Egyptian President Al-Sisi, Jordan’s King Abdullah II, and Palestinian president Mahmoud Abbas. Trump will probably visit Riyadh and Israel in the next month to review the developments of the issue. Feierstein furthermore ruled out the transfer of the US embassy to Jerusalem at the moment because Trumps knows that such a move would spark further conflict in the region and harm the peace process.

Regarding the US position towards Libya, Feierstein believes that America focused in the recent months on cooperation with influential regional forces, such as Egypt and the United Arab Emirates (UAE) to find a way out of the crisis there.

For Yemen, he said there are several scenarios to settle the conflict between the Houthis and the national government, one of which is to return to the pre-unification system or reduce the centralisation of the government, granting more authority to different regions and groups to manage their own affairs.

Is there an end to tragic fate of Syrian refugees in Lebanon?

Talks between Egypt and Israel on re-opening embassy in Cairo: Israeli media

Al-Sisi, Trump to meet on sidelines of Arab-Islamic-American summit

‘Most important for me is to continue to write’: refugee author Ramy Al-Asheq

Al-Sisi heads to UAE for bilateral and political talks

Washington to cut US economic aid to Egypt by half

Reform measures transform illusive system into a realistic one: Diab

Door-knocking mission begins its annual visit to the US