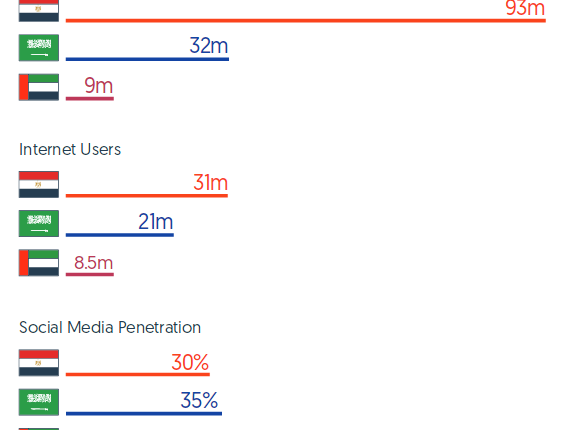 Social media has changed the way we use the internet in an unexpected way. Current internet use has changed compared to the beginning of the century.  The simple and attractive nature of social media has led to a huge increase in the number of internet users, as well as the launch of dozens of different social network platforms.

People in the Middle East and North Africa have interacted with social media in a way that has radically changed the region. Millions of users spending hours on the internet have transformed social media sites into the largest platform for promoting commercial brands and companies in the region.

According to Beaufort Analysis and Crowd Analyzer, Egypt is the country with the highest amount of Facebook users in the region, with 17 million users. 92 percent of Egyptian Facebook users have smartphones, and expatriates using Facebook only represent about 4 percent of total Egyptian users.

The percentage of social media users in terms of population in Saudi Arabia has reached 35%, and 65% in the UAE.

Twitter is less popular in Egypt, where the number of active users amounts to only 2 million people. About 418,000 people use Twitter via computers, 446,000 users via devices with iOS, and 1 million users via Android devices.

Similar to Twitter, Instagram is not very popular in Egypt. Only 2.8 million Egyptians use the photo sharing application—1.3 million are males and 1.2 million females. The number of Instagram users who access the app via smartphones are 2.3 million, with 140,000 of these users being expatriates.

The highest trending topics in 2016 on Facebook were the US election, followed by the Brazilian political news, and then Pokemon Go. On Twitter, Rio 2016 trended highest, followed by EURO 2016, and then the American elections.

2.6 billion people to be connected to the internet over next 6 years

Google banks on AI, but so do its rivals