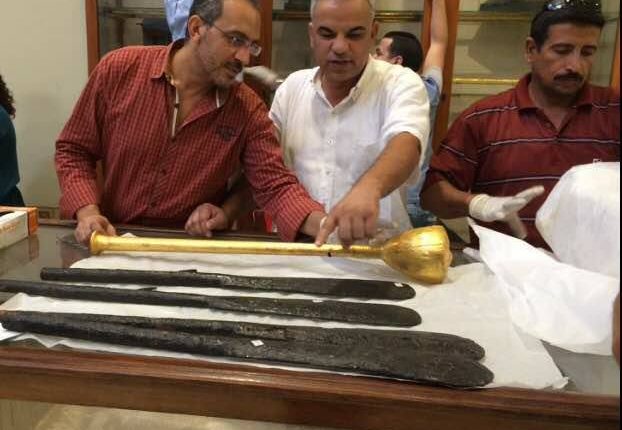 Another collection of Tutankhamen’s remains and belongings were transferred from the Egyptian museum to the overlooking Giza Plateau Grand Museum on Monday, in preparation for the soft opening of The Grand Egyptian museum in 2018.

The transferred collection includes dried and mummified seeds and fruits as well as a number of tiny symbolic boats and a chair painted in white plaster, according to Tarek Tawfik, GEM’s Supervisor General in a press release.
The seeds are a collection of dried dates, onions, garlic, wheat and doum.

“The collection was transported safely” Eissa Zidan Director General of the First Aid Restoration assured adding “restorers have used a special scientific methods in packing and transportation as well as organizing a detailed scientific report on the current conditions of all transported items before its transportation.”

Objects are currently under restoration for displaying at the museum’s opening.

Earlier in May, King Tutankhamen’s funeral bed along other belongings were transferred to the museum

The packing process lasted for around eight hours. The process was conducted in collaboration with a Japanese scientific team.

Before packing, the bed was subjected to scientific documentation and first aid restoration in order to guarantee its safe transportation, according to the statement.

Ministry of Antiquities operating with 90% loss of funds

Ministry of Antiquities continues attempts to save lost heritage