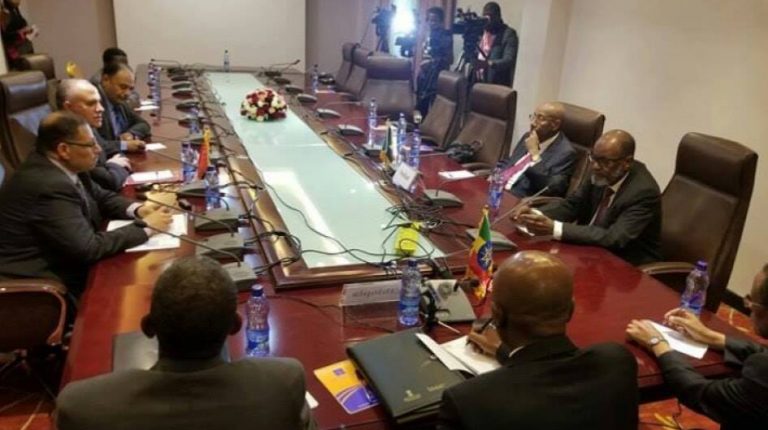 Ethiopia parliament speaker Abadola Jamida asserted on Saturday his country’s commitment to coordinate with Egypt, whether through areas of joint cooperation or negotiations of the Grand Ethiopian Renaissance Dam (GERD), according to Egypt’s state-owned broadcaster.

This came during Jamida’s meeting with an Egyptian delegation in Adis Ababa, headed by Egypt’s Ambassador to Ethiopia Abubakar Hefni Mahmoud, during which they discussed bilateral relations.

Jamida explained that Ethiopia would not “build its development and prosperity at the expense of any of the people of the region, including the Egyptian people,” asserting that integrity and constructive dialogue between the two countries would achieve mutual benefits without harming any party.

Meanwhile, Mahmoud stressed on the importance of enhancing bilateral affairs between the two countries.

The meeting came a few days after Egyptian local media reported that water abundance was seen in front of the GERD, which Egypt’s Ministry of Water Resources and Irrigation explained to be a result of the high level of construction, leading to the formation of a lake.

The ministry further explained in a statement that the amount of water flooding would not affect Egypt’s water security level.

The period of storage would determine the amount of effect of the GERD on Egypt, water resources expert Diaa Al-Din Al-Qousi explained to Daily News Egypt.

Al-Qousi added that a period of five or six years of storage in the GERD would severely affect Egypt’s water security level, adding that 12-18 years are needed to guarantee safety for Egypt.

Ethiopian officials said that Ethiopia was preparing to store water in GERD in July, before the completion of technical studies, which are conducted by French consulting companies to examine the impacts of the dam on water flow rates from the Blue Nile to the High Dam Lake, according to Egypt’s local newspaper Al-Shrouk’s report.

The report stated that Egypt had been informed that the storage of water would begin in July since the last visit of the Ethiopian Foreign Minister to Cairo three months ago.

In April, the Tripartite National Committee on the Renaissance Dam (TNCRD) finalised its meeting in Cairo in the presence of experts from three countries: Egypt, Sudan, and Ethiopia.

The meeting approved the schedule and mechanisms for exchanging data, information, and previous studies needed by the two French consultancy firms—BRL and Artelia—tasked with assessing the possible impact of the dam on downstream countries.

Egypt’s Foreign Minister Sameh Shoukry said earlier in July that Egypt could be the main party affected by the construction of GERD, if Egypt’s concerns “were not taken into consideration,” during a meeting with his Ethiopian counterpart Workneh Gebeyehu, according to state-owned newspaper Al-Ahram.

While Gebeheyu asserted Ethipia’s commitment to the 2015 declaration of principles, which was signed by Egypt, Sudan, and Ethipia, stipulating that the three countries agree upon all measures regarding GERD.

Egypt fears the dam will affect its historic Nile water share of 55 billion square metres, which it has had access to since the historic1959 agreement with Sudan.

TNCRD to meet in Sudan on Thursday

Ministry of Irrigation reaffirms Ethiopia has not begun filling GERD

Shoukry, Ghandour chair third round of political consultations between Egypt and Sudan