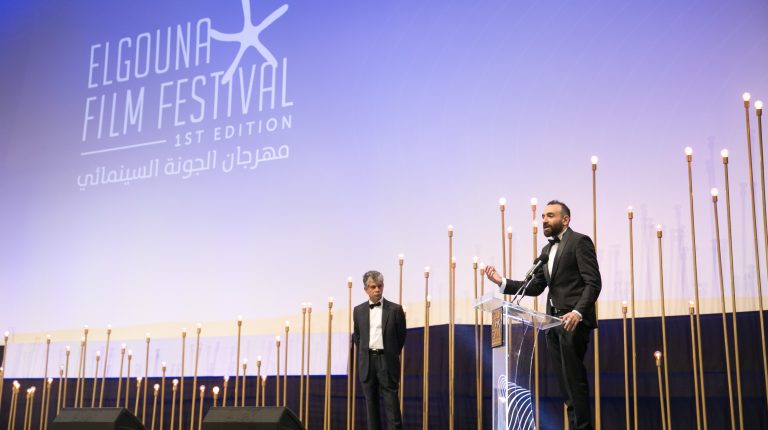 Under the slogan of “Cinema for Humanity,” the first edition of El-Gouna Film Festival launched on Friday night. With the attendance of numerous superstars, the opening ceremony of the festival kicked off with the screening of 48 international films and the start of several independent programmes for filmmakers.

With celebrities posing on the red carpet for paparazzi shots, the event witnessed the attendance of over 400 celebrities from over the world.

At the man-made oasis where the glamour of the Red Sea and greenish sceneries taking over the place, the festival aims to revive Egypt’s prominence in the film industry.

El-Gouna Film Festival is founded by Sawiris brothers, Naguib and Samih. Running from 22 to 29 September, the festival targets to honour humanity and raise compassion among human beings by screening the films participating from 36 different counties at the feature narrative competition, short films competition, and documentary competition.

Sawiris asserted that he also targets to spotlight El-Gouna as a touristic attraction for people to see the beauty of Egypt. “I want to thank my brother Samih for establishing this heaven on earth 20 years ago.”

Young actor Ahmed Fahmy hosted the event. With his light sense of humour, he added enthusiasm to the attendees and viewers before the band “Fabrika” performed a combined collection of national and international heritage songs.

The opening ceremony awarded iconic actor Adel Imam, dubbed as “The King of Comedy,” with the Career Achievement Award for enriching Arabic cinema with his films for decades.

Both Naguib and actress Yousra handed Imam the award, who came up to the stage with tears in his eyes, after screening a short reportage of his career with talks of his colleagues about how much Imam has influenced them making them better actors.

“Since the beginning of the first film Egypt produced in 1896, I believe our cinema is what presents the true image of Egypt,” Imam said in his speech. “Art runs in all Egyptians’ blood—from simple farmers who spend their nights singing heritage songs reaching filmmakers.”

“The way I see it, a nation without art is a country without a soul,” he added.

As for the festival, Imam expressed his happiness and pride for meeting international criteria of foreign film festivals.

“All I can see in this festival is love, compassion, beauty, happiness, and respect,” Imam stated. “These people (the Sawiris family) know the true meaning of cinema and art, and this land (El-Gouna) is what deserves to have international film festivals on.”

“I can clearly see the adeptness of El-Gouna Film Festival by the films it has selected to be screened in it,” El-Aris stated. “I can clearly imagine El-Gouna as an international city for cinema industry where films are shot on, and cinema schools are made for the passionate students, and where international film festivals like this are held on.”

The festival is also to award legendary star Forest Whitaker at the closing ceremony for his enhancement in spotlighting political and social human cases in his films.

Amr Salama’s “Sheikh Jackson” was the opening film of the festival. It competes with another Egyptian film “Photocopy” for director Tamer El-Ashry, at the feature narrative competition, along with 15 other films from 34 countries.

“Sheikh Jackson” stars Ahmed El-Fishawy, who stirred conservancy when he described the screen with “shitty.”

“This film proved to me that dreams can really come true,” Salama told Daily News Egypt.

“I’ve been working for three years on this film, but have dreamed of it for 35 years” he added.

The juries—including filmmakers and experts from the US, Russia, and the UK—of three competitions were announced at the opening ceremony.

Why will CBE not allow Sawiris to establish a bank?

Sheikh Jackson is selected to participate at the Oscars