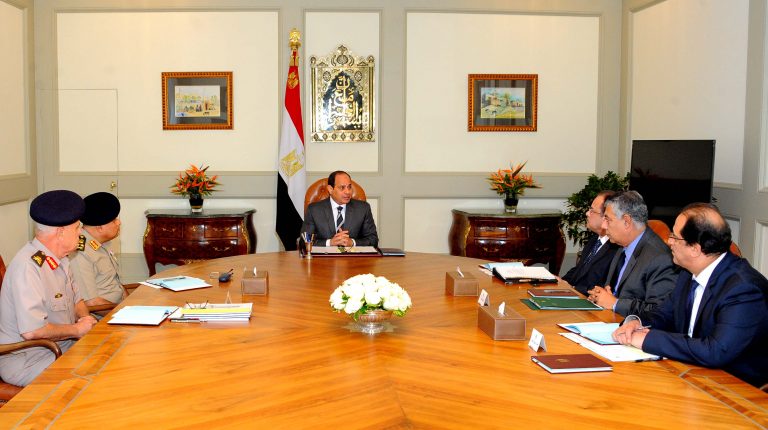 The Ministry of Interior announced on Friday it recovered 13 bodies and a number of explosive belts, following clashes with militants on a highway in Assiut, according to an official statement.

President Abdel Fattah Al-Sisi held a meeting on Saturday with the ministers of defence and interior to follow up on the clashes.

The ministry said that the suspected militants were stationed in a farm near the Assiut highway. “The farm was attacked at dawn on Friday, and the militants were attacked by our forces,” it added.

The 13 bodies belong to the militants killed in the clashes, however, their identities have not yet been announced. Photos of the bodies were published along with the official statement, however the faces of the  deceased were edited out of the frames. The pictures also included weapons and bullets of different types, laid out in an orderly fashion. The statement said that the alleged militants wore military clothes, however, the pictures showed bodies of individuals in civilian clothes, and one of them showed a body with its hands wrapped around its back.

Pro-state newspapers described the attack as “an act of revenge against terrorists” after the deadly attack on 20 October in Al-Wahat road that left 16 policemen killed.  State-owned news agency MENA said that “the security apparatus directed a severe blow to the terrorist elements in vendetta for the blood of its men who were martyred last week.”

The ministry added that over the past few days, sources which the police depend on were contacted and ordered to provide any information about militant activity in the area. Special scouting took place in remote areas in the city of Giza, “where it is considered a safe ground for these elements for training and planning attacks.”

After the attack, the State Security Prosecution started investigating the incident, and is expected to investigate the bodies and gather DNA samples in order to identify the bodies, state media reported. It added that the prosecution also asked the security apparatus to investigate the dead suspects and their alleged organisations.

The major shoot-out last week occurred after state security received information of a militant hideout 135 kilometres away from Cairo, which security forces then raided. Fifteen militants were also killed in the clash, the ministry said, adding that there is still one police officer reportedly missing in action.

After the incident, the police announced that it arrested 12 alleged members of the “Vanguards of Hasm” group, which is believed to be an off-shoot of the original Hasm group. The off-shoot group are suspected of carrying out the 20 October attack and preparing for more attacks against security facilities and personnel.

Hasm first became known in early 2016. In August, the group said it was behind the assassination attempt on former Grand Mufti Ali Gomaa. In October of the same year, militants driving a black civilian vehicle opened fire on military leader Adel Ragaai, assassinating him in front of his residence in Al-Obour City.

Security forces remain deployed around the Al-Wahat area to observe terrorist elements. The desert road was closed from the direction of Giza and Fayoum with a number of checkpoints, in addition to encircling the mountainous area to besiege terrorists and seize weapons and explosives in their possession.

4 in 10 students complain of lack of information about companies as workplaces: Universum Global

Parallel: a meeting point between soft and masculine

“To build it” campaign collects more than three million signatures