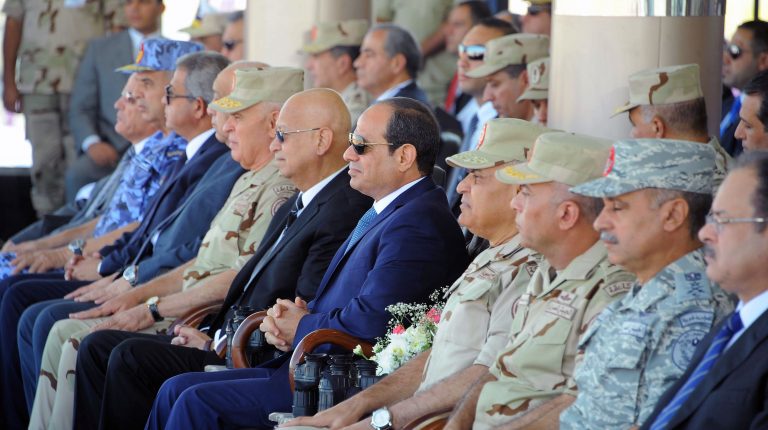 President Abdel Fattah Al-Sisi witnessed Sunday a military parade by the Third Field Army in Suez,  inspecting the readiness of the forces according to state media.

The ‘war inspection’ featured parading and observing Squad 19th of the Third Army its personnel, combat readiness, and armoured vehicles.

Head of the Third Filed Army Mohamed Al-Dosh said that the Armed Forces exerts every effort to develop the country. During a speech, he asserted that the performance of the army in the area of development does not affects its combat effectiveness.

The same statements were echoed by Minister of Defence Sedki Sobhy who added that the inspection aims to raise the efficiency of the forces of the forces in Sinai, according to state media. “The army will remain keen to maintain safe environment in Sinai,” he said adding that the army will confront an attempts “to spread chaos near the boarder.”

The Military inspection takes place after the country witnessed a major shake-up of the security command on Saturday, in both the police and the army, following the attack last week which targeted 16 policemen.

Mahmoud Hegazy was promoted and named as presidential adviser. He held the post of chief of staff since March 2014. His reign witnessed achievement in the fields of counter terrorism and arms deals.

Meanwhile the current chief of staff, Mohamed Farid Hegazy was a member of the Supreme Council of the Armed Forces in February 2011 and held top positions in the Egyptian army such as the head of the Second Filed Army, and Deputy General of the Defence Ministry.

In a separate reshuffle, which was announced hours after the army’s announcement, the Minister of Interior replaced several high-ranking security officials, including the apparatus’s top intelligence department, the National Security Apparatus which was headed by General Mahmoud Sharawi.

There is no specific reason or explanation for the sudden changes, however the reshuffle took one week after the deadly attack on 20 October in Al-Wahat road that left 16 policemen killed.

Security analysts have estimating different scenarios for the reasons beyond the decisions that came one week after Al-Wahat shoot-out, in which their view regarding the reasons varied among attempts to enhance security performance, to modification to overcome failures, to benefit from other experiences.

“Its a normal procedure, promotion of policemen or armed forces are always required to security performance in the country”, the head of Defence and Security committee in parliament Kamal Amer told Daily News Egypt.

Amer said that reshuffle are always justified as “shortage”, however, it always important to get benefit of different experiences of security personnel, adding that if the decision was really to poor performance, so the ministry could have dismissed the officials not transferred them to other positions.

When asked if Al-Wahat shoot-out could be beyond the reshuffle, the expert said that it certainly could be one of the reason, but not main reason, as to intensify security efforts, we should improve performance through looking to qualification of alternative leaders, to enhance compact effectiveness.

Last Friday, The Ministry of Interior announced on Friday it recovered 13 bodies and a number of explosive belts, following clashes with militants on a highway in Assiut, according to an official statement. The ministry said that the suspected militants were stationed in a farm near the Assiut highway. “The farm was attacked at dawn on Friday, and the militants were attacked by our forces,” it added. The 13 bodies belong to the militants killed in the clashes, however, their identities have not yet been announced.

The 20 October attack was the biggest in the western desert, after militants have spread their activities out of Sinai.

North Sinai witnessed the deadliest attack in two years on 7 July. An Islamic State (IS) group claimed the attack, which killed over 20 in Rafah. It was followed by intense clashes, which the army said resulted in the killing of 40 militants.

Thus, measures undertaken by the army to combat terrorism continue. They include operations such as the Martyr’s Right series of which the fourth phase was launched in mid-July. Such operations target terrorist dens, and alleged militants are often killed or captured.

The country has been under a state of emergency since early 2017 when Coptic Churches were attacked leading to dozens of causalities.

The Egyptian army also continues to target tunnels near the borders in North Sinai to prevent the smuggling of weapons.

“To build it” campaign collects more than three million signatures

Why the coup in Turkey failed

The war of wages: maximum wages loses the fight