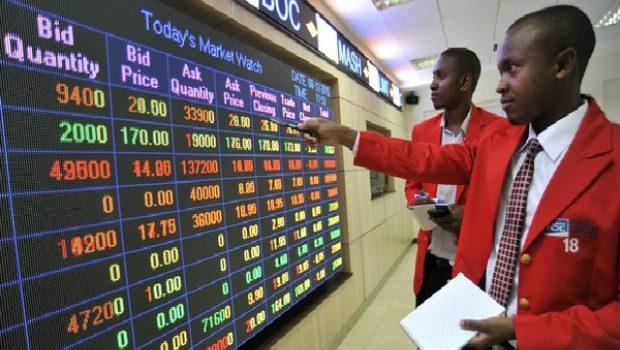 African stock markets appear to be on a roll, with market capitalisations almost doubled in the few last years, albeit liquidity remsindat low levels.

In 1989, only five sub-Saharan African countries had stock markets. Today, 16 countries, including Ghana, Malawi, Swaziland, Uganda, and Zambia, have their own operating stock markets. Between 1992 and 2002, the capitalisation of African stock markets more than doubled from $113 billion to $245 billion.

Despite this increase, their average capitalisation (excluding the markets of South Africa and Zimbabwe) of about 27% of GDP remains lower than most emerging markets.

Moreover, the region’s markets are immature: indicators of stock market development show that they are small and have few listed companies. Market liquidity is also low, with turnover ratio of less than 1 percent in Swaziland compared with about 29 percent in Mexico.

Low liquidity implies low business volume and greater difficulty in supporting a local market with its own trading system, market analysis, and brokers.

In terms of investment return, however, sub-Saharan Africa’s markets continue to perform well.

The annual return on the Ghana Stock Exchange, for example, was 144% in U.S. dollar terms in 2014 compared with a 30% return by MSCI Global Equity Index.

The development of stock markets in Africa is expected to boost domestic savings and increase the quantity and quality of investment, according to a recent study by IMF.

Stock markets are seen as enhancing the operations of domestic financial systems in general and capital markets in particular.

Critics, however, argue that a stock market may not perform efficiently in developing countries and that it may not be feasible for all African countries to promote stock markets, given the huge costs and the poor financial structures.

So far, corporate financing patterns in some African countries suggest that stock markets are an important source of finance.

In all these countries, the stock markets were the single most important source of long-term external finance.

At the macroeconomic level, however, the study finds inconclusive evidence that Africa’s stock markets have had much effect on growth.

According to the results, the value of shares traded relative to GDP has a positive and significant influence on economic growth, but the capitalisation and turnover ratios are too low to influence growth.

Integration would increase the market size of African stock exchanges because the number of national exchanges would decline.

Automation of trading systems is expected to help reduce costs and inefficiencies and increase trading activity and liquidity by speeding up operations. Automation is an expensive venture, but the cost is coming down as electronic communication networks and alternative trading systems proliferate.

According to the study, demutualisation is expected to reduce governance problems in mutualised exchanges by opening up trading rights, admitting new trading partners, and broadening ownership to allow the public to invest in exchanges.

The study found that institutional investors often are at the forefront in promoting efficient market practices and financial innovation.

They typically favour greater transparency and market integrity and encourage efficient trading and settlement facilities. Thus, their involvement can help force commercial and investment bank, as well as other market intermediaries, to be more competitive and efficient.

Important disclosure requirements must be simple and supportive of the legal and accounting framework. Similarly, enforcement procedures need not be long, cumbersome, and expensive.

The presence of a securities regulator and a strong legal system in Africa is important to ensure compliance and an ability to prosecute. Strong corporate governance mechanisms in Africa will also help boost investor confidence in regulatory issues.

Another source of listings are the local units of multinationals. MTN, a South African telecoms giant, is preparing to list in Nigeria as part of a settlement with authorities after breaking SIM-card rules.

Tanzania has ordered eight telecom operators, including three with international backing, to float 25% of their shares in 2016.

Liquidity is an even bigger challenge. Shares rarely change hands: outside South Africa, the annual turnover is typically less than 10% of market capitalisation. In Nairobi, which relaxed rules on foreign ownership last year, foreign investors accounted for three-quarters of trading in the three months to September.

Some hope to stir up interest with new products. Nigeria has eight exchange-traded funds (ETFs), which track market benchmarks. Nairobi will roll out a host of derivatives next year. Even little Swaziland has its eye on ETF trades.

Nigeria and Kenya have the heft to forge ahead, but smaller exchanges could struggle.

In a new paper, economists from Erasmus University, Rotterdam, and City University, London, examine 59 nascent stock exchanges around the world.

They find that those which start out small, with few listings and low turnover, tend to remain so.

Strong banks and growing savings increase the chances of success.

Africa is an important place for Egypt to access: chairperson of Financial Regulatory Authority

Egypt to host the 21st ASEA Annual and Flagship Conference