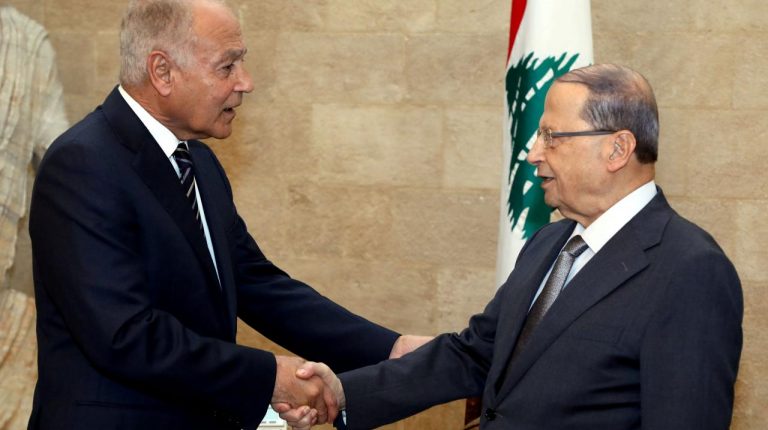 Resigned Lebanese Prime Minister Saad Al-Hariri said on Sunday through a Twitter post that he will meet with President Abdel Fattah Al-Sisi in Cairo on Tuesday.

Meanwhile, Secretary-General of the Arab League Ahmed Aboul Gheit met Monday with President Michel Aoun in Lebanon. According to Reuters, Aoun said that Lebanon “could not accept suggestions that its government was a partner in acts of terrorism.”

This comes in light of the political crisis caused by his sudden resignation announcement from Riyadh and Lebanon’s objection to accusing Hezbollah of terrorism and describing it as a terrorist organisation during an Arab League meeting on Sunday.

FM Sameh Shouky said Egypt’s stance relies on three aspects, first of which is the guarantee of states’ sovereignty through institutions, not militias. Second, the rejection of any form of foreign interference in an Arab state and third, setting conditions for Iran’s acceptance as a friendly neighbour.

The urgent Arab foreign ministers meeting held Sunday upon Saudi Arabia’s request came amid “unusual circumstances,” saidAboul Gheit in his statement, in which he accused Iran of firing ballistic missiles into Arab capitals and being the cause behind the protracted war in Yemen.

On 4 November, Saudi officials said a missile launched by the Iran-backed Houthis from Yemen was intercepted near King Khalid International Airport in the capital Riyadh. Since then, the kingdom renewed escalations of claims, accusing Iran of hostility.

On the same day, Al-Hariri announced his resignation from Riyadh, not only a surprising move, but also one considered, by many parties, as forced on a prime minister deemed held hostage by the Saudis, including Aoun and Iran-backed Lebanese party and militia Hezbollah.

Al-Hariri, who travelled to Paris on Saturday and is expected in Cairo on Tuesday, has yet to return to Beirut.

The Arab meeting was indeed held amid tense situations, especially in light of the absence of the foreign ministers of several countries, most significantly Lebanese FM Gebran Bassil, who reportedly wanted to avoid confrontation with the Saudis.

First, a quartet meeting was held including Saudi Arabia, the UAE, Bahrain, and Egypt. The four countries initially described themselves as “countries facing terrorism” when they decided to boycott Qatar in June on grounds of that country supporting and funding terrorism.

On Sunday, a statement by the Arab League referred to the quartet as “countries concerned with Iranian interferences in the internal affairs of Arab nations.”

Both Saudi Arabia and Bahrain came with prepared reports on alleged Iranian crimes in their countries and requested permission to distribute them.

In his speech, Aboul Gheit detailed Iran’s “subversive actions” as being: ballistic missiles launched through Houthis in Yemen towards the Saudi kingdom, the oil pipeline blast in Bahrain on 10 November, the creation of espionage cells in Arab countries – notably a case which pushed Kuwait to cut diplomatic ties with Iran in July – and the funding of armed militias.

As such, the final statement of the meeting tasked Arab representatives in New York to address the UN Security Council concerning Iran’s alleged violations.

Saudi FM Adel Al-Jubair focused on Yemen, stating that Saudi Arabia was the victim of Iranian practices and repeated assaults through the Houthis, which didn’t even “respect the holiness of the sacred Mecca, towards which three ballistic missiles were fired.”

This comes as Saudi Arabia faces increasing criticism and accusations from the UN over the humanitarian crisis in Yemen.

Meanwhile, Al-Jubair did not mention Hezbollah in his speech, despite what Al-Hariri described as “an assassination plot against him and accusing Iran and its Lebanese ally Hezbollah of sowing strife in the Arab world,” according to Reuters.

Meanwhile, Bahraini FM Khalid bin Ahmed Al-Khalifa focused in his speech on united Arab efforts to face Iran’s threats. “Iran is escalating, which puts us in front of a collective responsibility to protect our national security. The question is, are we able to do it?,” Al-Khalifa said.

He addressed “brothers in Lebanon”, whom according to him, are being controlled by Iran’s most influential faction, Hezbollah, which is acting outside its borders and threatening Arab countries’ security.

Jordanian Foreign Minister Ayman Safadi also condemned the recent ballistic missile attack targeting Saudi Arabia, expressing concern over the security of the Kingdoms of Saudi Arabia and Bahrain and sending a message to Iran that expansionist policy and pursuit of power and domination will not be tolerated, Jordanian media reported.

The Hariris’ struggling quest for power in succession

Al-Hariri in Elysee after speculations about his Saudi Arabia stay

Al-Hariri says he is free in Saudi Arabia, will return to Lebanon soon