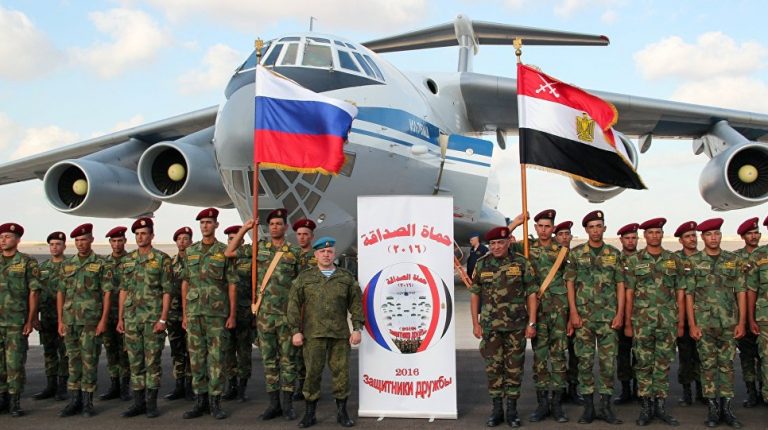 Egypt’s red carpet welcome Monday for Russian President Vladimir Putin is the latest encounter in the diplomatic relations between the two countries, which has resulted in military purchases and deals that serve the objectives of both countries.

Although economic relations and the much-awaited Dabaa Nuclear Power Plant are at the top of the agenda of Monday’s visit, military deals between the two countries remain a solid point of interest, after a period of tensions that lasted for 45 years since former then-president Anwar Sadat shifted the country’s direction towards the United States. And although most of the arms and machinery that the Egyptian army used to fight against Israel in 1973 were made by the then Soviet Union, relations remained intense as Egypt leaned towards the west. After the Camp David Accords, Egypt became increasingly prominent in the Arab world, but was granted a massive US military aid package, alienating its traditional ally and weapons supplier.

This wave of tensions disappeared after the ouster of Islamist former president Mohamed Morsi. After the fall of the Muslim Brotherhood, then-president Barack Obama suspended military aid to Egypt as the American administration feared that violations of human and political rights could take place.

However, as Russia did not express serious concerns about possible human rights violations, it stepped in to fill the gap, and started to support the post-30 June regime politically and militarily. Even after the partial return of aid and continuation of military drills with the US, Egypt and Russia remained close allies, as they agreed on several issues, such as the Syrian conflict.

Egyptian-Russian relations have seen major developments since Abdel Fattah Al-Sisi took over as president, with mutual presidential and ministerial-level visits. In March 2015, the two countries signed a protocol on military cooperation and announced the beginning of naval exercises.

Joint military exercises usually highlight certain closeness between their participants. The “Friendship Bridge” exercise began its first round in Egypt in 2015, from 6-14 June, and was meant to “become an important step towards strengthening the mutual understanding” between the two navies, according to the Kermlin.

Days after the US cut part of the financial and military aid to Egypt in August 2017, Russia announced that tactical military exercises by both sides will take place in September in Russia, where the drills took place to train Egyptian pilots on the newly acquired Ka-52 Alligator attack helicopters.

The Egyptian army is facing militants in Sinai and have engaged in guerrilla warfare with extremists in mountainous areas and civilian sites. The 2017 round of Friendship Bridge drills witnessed training to target hostile militia elements. The drills, which took place in September, saw Russian reconnaissance and combat Ka-52 Alligator pilots preparing the crews that will operate the helicopters in Egypt.

The Ka-52 Alligator attack helicopters are planned to operate from and land on the Mistral warships’ landing docks. Russia announced that it will supply Egypt with 15 Ka-52 Alligator helicopters by the end of this year, as part of an agreement to deliver a total of 46 helicopters.

The Russian Helicopters company previously announced it was aiming to expand its helicopter fleet for the civilian market, citing the scheduled opening of a service centre for Mi-8/17 helicopters in 2017 in Egypt, as an example of deepening cooperation. The Mi-8/17 is operated as a military, as well as a civilian, helicopter and constitutes a major component of the Egyptian Air Force’s helicopter fleet. Also, Russia is expected to provide Egypt with Mikoyan MiG 29, MiG 35, and Sukhoi Su-30 fighter jets

Furthermore, this is not the only weapon Russia agreed to send to Egypt. During Al-Sisi’s visit to Moscow in 2014, both countries signed an arms deals worth of $3.5bn, with the aim of upgrading Egyptian missile systems with Russian S300 anti-aircraft missiles.

Last week, the Russian government approved a draft agreement which would create a partnership with Egypt allowing each country to use the other’s airspace and airbases. A final agreement is yet to be negotiated with Cairo.

The decree said the draft had been preliminarily worked through with the Egyptian side. It gives orders to the Russian Ministry of Defence to hold negotiations with Egyptian officials and to sign the document once both sides reach an agreement.
According to the draft agreement, Russian and Egyptian war planes would be able to use each other’s airspace and airfields by giving five days advance notice, which is expected to be valid for five years and could be extended.

Since the start of military conflicts in the Middle East since 2011, Russia has been been trying to build political influence in several countries. Moscow was rumoured to be building a military base in Libya and supporting General Khalifa Haftar, who seeks to take back the country from Islamist militants.

Just before the Monday visit to Cairo, Putin ordered the partial withdrawal of Russian troops from Syria, during an unannounced meeting with Syrian President Bashar Al-Assad at the Russian Hmeimim airbase, near Latakia, Sria, after almost two years of military support that has been crucial in turning the tide of Syria’s civil war in Al-Assad’s favor.

Ministry of Defence to regulate possession, use of drones

In midst of recession, clothes retailers call on Ministry of Supply to start sale season early

2018 will be year of development for Egyptian foreign diplomacy and international relations: Al-Orabi