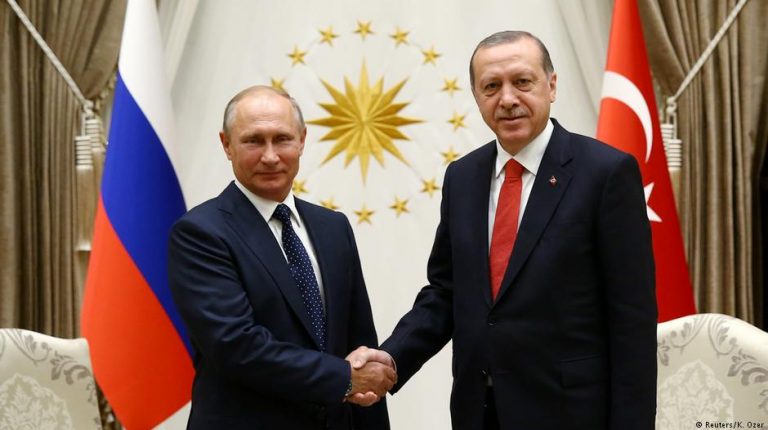 Russian President Vladimir Putin discussed on Monday, in a meeting with his Turkish counterpart Recep Tayyip Erdogan, the future of a political reconciliation in Syria, as well as other issues in the Middle East.

Putin said at a joint news conference with Erdogan, “we exchanged views on the international agenda with a focus on the situation in the region and the settlement of the Middle East and the Syrian crisis.” Putin said that he agreed “to hold the eighth round of negotiations on Syria in Astana next week.”

“We hope to activate the process of settlement in Syria, within the framework of Geneva and Astana, and we continue to work on a comprehensive ceasefire in Syria,” he further added.

The Russian president praised the Turkish role in the settlement and national reconciliation process in Syria, stressing that “preparations are underway to hold the Syrian national dialogue conference at the beginning of next year.” He added that the drafting of a new constitution and holding elections under the auspices of the UN will be discussed.

This came after he visited Egypt to meet with President Abdel Fattah Al-Sisi, when they discussed the much-awaited Dabaa Necluar Power Plant, as well as other economic partnerships.

For his part, Erdogan said he would meet Putin again in the Russian city of Sochi to discuss the Syrian issue. “Our next step is to hold a second meeting in Sochi as soon as possible, and we agreed to continue our contact in this regard,” Erdogan said.

Regarding the latest updates in Jerusalem, Putin said that Israel sees the recent developments on Jerusalem as an opportunity to increase the violence and pressure on the Palestinians, adding that “no one with a conscience, morality, principles, and values can ignore those crimes.”

The Turkish president stressed the position of his country, which rejects the American recognition of Jerusalem as the capital of Israel, and described the move as “incorrect.”

Sochi congress begins despite absence of some Syrian opposition figures

Jerusalem belongs to all religions

Russia to analyze IOC Olympic ban before deciding on next step