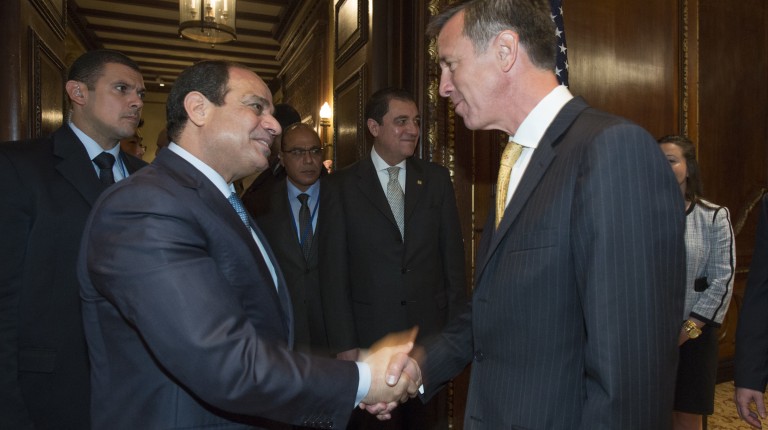 Egypt’s Minister of Defence Sedki Sobhi headed to Nicosia on Tuesday, leading a high-ranking military delegation in response to an official invitation from his Cypriot counterpart, according to a statement from the ministry of defence.

The visit is set to last for several days and comes after an invitation from Cypriot Minister of Defence Christoforos Fokaides. The two military leaders will discuss military and security cooperation between the two sides, the statement read.

Sobhi’s visit to Nicosia comes amid developments in the relations between Egypt and Cyprus in different fields.

In April, Fokaides visited Cairo and met with Minister of Military Production Mohamed Al-Assar, when they discussed ways of utilising Egypt’s military production capabilities to enhance relations between both countries. During the visit, Fokaides stressed the importance of Egypt’s role in confronting extremism and terrorism.

In November, President Abdel Fattah Al-Sisi travelled to Cyprus and attended the fifth tripartite summit between the two states and Greece. He met President Nicos Anastasiades and the two leaders evaluated and promoted bilateral cooperation in existing and new areas and discussed regional cooperation to enhance peace and stability in the eastern Mediterranean.

Egypt has strong ties with Greece and Cyprus. The Egyptian president visited Greece in December 2015 in a three-day visit, during which he discussed, with his Greek counterpart, boosting bilateral relations and enhancing economic ties between the two countries.

In October 2016, the fourth round of the trilateral summit between Egypt, Cyprus, and Greece was held in Cairo. As a result of the summit, the three countries agreed to work on implementing projects in the fields of energy, maritime transport, tourism, and agriculture.

The summit also included discussions on the migration crisis and the constant flow of refugees from countries across the region.

Ministry of Defence to regulate possession, use of drones

First gas import license to be granted in 2018