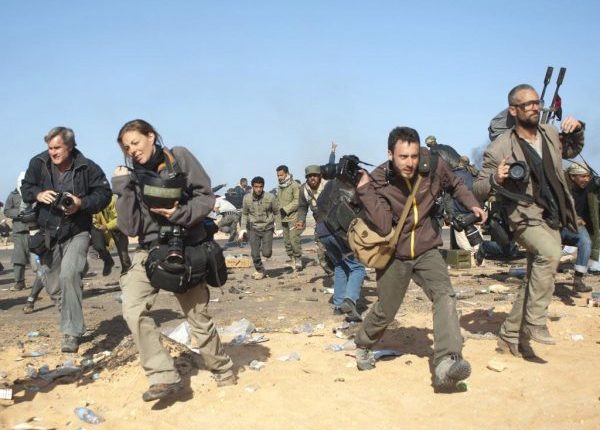 Killings, detentions, hostage situations, and disappearances are among some of the threats journalists face. An annual round-up recently published by Reporters Without Borders (RSF) touched upon those threats in different countries around the globe, showing how much is at risk for the sake of pursuing a single story.

“A total of 65 journalists (including professional journalists, citizen journalists, and media workers) were killed worldwide in 2017. Twenty-six of them were killed in the course of their work, the collateral victims of a deadly situation such as an air strike, an artillery bombardment, or a suicide bombing. The other 39 were murdered, and deliberately targeted because their reporting threatened political, economic, or criminal interests. As in 2016, most of the deaths were targeted (60%). The aim in each case was to silence them,” RSF stated.

Nonetheless, this death toll is considered the lowest in 14 years. RSF explained that the trend is due to journalists abandoning countries that have become too dangerous and partly due to efforts by international organisations to provide journalists with more protection.

What were the deadliest countries in 2017?

Syria continues to top the list as the war there extends into its seventh year. In March, RSF said the number of journalists killed reached 211 since the beginning of the conflict.

In 2016, the website Syria Deeply reported that the number of journalists kidnapped there was “unprecedented, reaching its peak in 2013 with almost one journalist kidnapped every week.” In a report, it quoted a senior associate at the Committee to Protect Journalists (CPJ) saying that there were “simply less journalists left in the country to be killed or kidnapped.”

Although not a conflict zone, Mexico remained second on RSF’s list from last year. Organised crime prevails and journalists covering drug trafficking are violently repressed. The killing of investigative journalist Javier Valdez Cárdenas was one of many examples.

“Cárdenas knew his life was on the line every minute of every day as he wrote of the horrific crimes of his country’s powerful and heavily-armed drug barons. Two gatilleros (hit men), presumed to have been hired by the drug lords, finally silenced him on Monday, riddling the 50-year-old with 12 bullets in broad daylight as he left his newspaper office in his hometown of Culiacán in the north-western state of Sinaloa,” The Independent reported on 17 May.

Meanwhile, RSF described Iraq and Afghanistan in its 2017 report as “predator countries” and the Philippines as “Asia’s deadliest country.”

If not killed, what other alarming risks do journalists face?

The numbers are concentrated in the following countries: Syria (29), Yemen (12), Iraq (11), and Ukraine (2). Extremist groups or militias holding journalists in the Middle East include the Islamic State group (IS), the Houthis, Al-Qaeda, Al-Nusra Front, and separatists in Ukraine.

There were also two missing journalists at the time of RSF’s report. Pakistani blogger Samar Abbas, based in Karachi, has not reappeared since he was abducted in January 2017 with colleagues who have since returned.

In the meantime, journalist Utpal Das has just returned to his family, The Dhaka Tribune reported Wednesday. Das was reportedly kidnapped in October and was dropped off by several unidentified persons. His alleged kidnappers had reportedly asked for ransom but the parents refused to pay it until they made sure their son was alive and well.

As for detained journalists, the number stood at 326 worldwide as of 1 December 2017, as RSF asserted their detention was in connection to their provision of news and information. Top countries jailing journalists included China (52), Turkey (43), Syria (24), Iran (23), and Vietnam (19).

To which extent should journalists’ lives be at risk?

Journalists would rarely refuse a job because of safety concerns.

“What I can say is that it is a professional and moral obligation that news outlets do what they can to mitigate the risks, especially when they’re relying on freelancers to cover the most dangerous stories,” CPJ’s Senior MENA Research Associate Jason Stern told Syria Deeply in August 2016.

Freelance journalists have been the subject of concern for press defenders and human rights advocates because they are often deprived of rights as opposed to professionals, such as medical insurance, safety equipment and training, and decent payment.

“Resentment toward media conglomerate indifference to freelancer safety is escalating,” pointed out a 2015 report by the Canadian Journalists for Free Expression (CJFE).

In 2015, the ACOS Alliance (A Culture Of Safety) was launched as a coalition of media organisations with the aim of taking practical steps to improve the safety of freelance journalists. It outlines different press principles, including tips for journalists on dangerous assignments and news organisations making assignments in dangerous places.

The reporter and TV anchor for Kurdish media network Rudaw was killed in Mosul on 25 February. According to Rudaw’s website, Gardi was covering heavy clashes between Iraqi forces and IS and hoped to film a mass grave where hundreds of civilians were reportedly buried by IS. She was killed by a roadside bomb near the grave.

Director General of UNESCO Irina Bokova deplored her death saying her “commitment to bringing news and information to the public should not have cost her life.” Bokova also called for more protective measures to ensure the safety of reporters covering conflict zones.

Rudaw’s Executive Director Ako Mohamm said journalists were always instructed to be behind the frontlines of the war but that Gardi appeared to have moved closer to the frontlines “out of seriousness to her job.”

The devoted journalist presented a daily special programme on the Mosul offensive from inside the city and continued to do so until her death.

In March, the Turkish Kurdish journalist and reporter for RojNews died due to her injuries. According to RSF, she was shot in the head by sniper fire on 3 March in Sinjar.

This happened as she was covering clashes between forces of the Kurdistan Democratic Party and a Yazidi militia allied with the Kurdistan Workers Party (PKK).

The journalist, who also worked for a feminist news website, was taken to a hospital in Syria where she died a few weeks later.

According to the International Press Institute, another journalist who was injured along with her, said they were returning from an “area where they had been trying to interview Rojava Pershmerga troops when they decided to cover clashes that had broken out,” accusing the same group of firing on them while Arhan was in turn accused of being part of a scheme to ambush the troops.

In June, the Franco-Swiss conflict reporter also died in hospital due to injuries from a Mosul mine blast, which also killed her French colleague and Iraqi fixer.

Robert had undergone surgery in Iraq but later died in Paris. She was working on a report for a weekly French programme and had accompanied Iraqi forces in their battle against IS to retake Mosul.

She exclusively covered the hunt for jihadists and published an exceptional article about an IS photographer in the magazine Paris Match.

Her colleagues described her as “a true professional of the war, methodical, rigorous, was never tired, always in action,” according to a report by Le Monde.

Her death was deplored by Bokova.

Robert’s death brought the number of journalists killed in Iraq to 29 since 2014, according to RSF.

In 2007, Robert started a fierce campaign against authorities in Dubai, where she lived, to demand proper retribution for her 15-year-old son who had been kidnapped and raped.

The body of the young Swedish journalist was discovered in Copenhagen on 21 August, but she had already been reported missing as of 10 August.

According to the BBC, her mutilated torso was found by a passing cyclist as her head, legs, and clothing were found in weighted-down bags by police divers on 6 October.

Her brutal murder remains unsolved despite Danish inventor Peter Madsen being tried as a suspect, who denied killing her but gave inconsistent accounts on her death.

Stories by her family, friends, and colleagues emerged on her exceptional dedication to her job and her quest for the most dangerous stories. She produced pieces for The New York Times, The Guardian, Time, among others.

Sruthi Gottipati, a freelance journalist and friend of Wall’s, published an important piece in The Guardian detailing the efforts, risks, challenges, and determination of freelance female journalists like Wall and herself.

The Maltese journalist was killed in October in a car bomb because of her regular work on corruption exposure of dominant figures including businesspersons, top government officials, and opposition leaders in Malta.

Galizia’s blog, the Running Commentary, ran hundreds of stories on the topics of corruption, money laundering, and shady banking, which continued until the day of her death.

Her most important work included exposing her nation’s links to the infamous “Panama Papers”. A description of her in a Guardian article read: “Her style was fearless, witty, and sardonic. She became the island’s most celebrated reporter and teller of plain truths.”

Ten suspects were arrested over her murder but only three have so far been charged. Evidence suggested that her murder was carefully planned and that the bomb was detonated by a mobile phone signal sent from a boat off the island’s coast, according to media reports.

Her family however remained sceptical about the independence of investigations.

Tax on mobile lines to be implemented next FY

Iran, Turkey, and the interests game

‘A good neighbour’: Istanbul Biennial on show in Munich

Op-ed review: Jerusalem, the Palestinian cause, and the Arab world