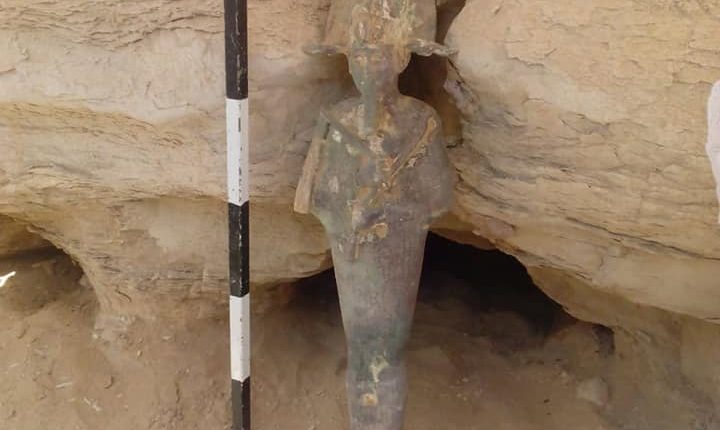 An ancient tomb dating back to the Ptolemaic period was discovered on Sunday during excavation work in the Sidi Gaber district of Alexandria, Mostafa Waziri, general secretary of the Supreme Council of Antiquities, announced in a press release.

The tomb was found at the hands of an Egyptian archaeological mission, that previously carried out the excavation work for the footing of a new building in Al-Karamili.

Waziri described the tomb as “the largest to be discovered in Alexandria so far, with a height of 185 cm, length 265 cm, and width of 165 cm.” An alabaster head, believed to be the owner of the tomb, was found nearby.

A black granite sarcophagus was found inside the tomb, which was discovered only five metres underground.

The mission found a layer of mortar between the lid and the body of the sarcophagus, “which had not been opened since it was closed in antiquity,” said Ayman Ashmawy, head of the Ancient Egyptian Antiquities sector.

The Ministry of Antiquities also announced on Sunday the discovery of a bronze statue of the god Osiris, on the eastern side of the King Djoser step pyramid in Saqqara. The statue was found during the restoration work at the site.

Waziri stated that it was found inside a small narrow crack among the front giant limestone blocks of the pyramid.

The statue features Osiris standing and holding a feather in one hand and a sceptre in the other, while wearing a double mask on his head.

Sabri Farag, head of the Saqqara archaeological site, said in a press release that the statue probably dates to the Egypt’s Late Period (circa 664-332 BC). He added that the statue was probably kept in there by a priest who wanted to save it. The statue will be under renovation in Saqqara.

My Favourite Fabric: Relating the Syrian revolution with female sexuality