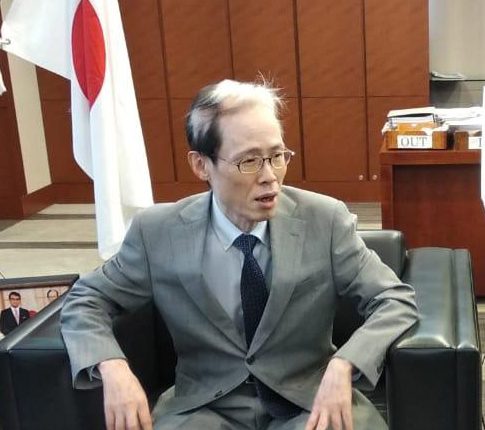 Masaki Noke, Japanese ambassador to Egypt said that lots of Japanese companies are interested in investing in the Egyptian market, with particular focus on energy, manufacturing, and automotive sectors, adding, “companies are still waiting to make sure that their plans are going to be good investments before moving forward and injecting new money in the market.”

Egypt has good advantages like the sunny climate and wind in some particular areas such as Zafarana which enables the country to be attractive for renewable energy companies, the ambassador told Daily News Egypt.

The ambassador asserted that Japanese companies are interested in the manufacturing sectors for example, and automotive industry companies.

“Japanese automotive industry companies are interested in enlarging their presence in Egypt ,but to do that probably we will need a clear signal about the free trade agreement policy,” mentioned the ambassador.

“If you have a free trade agreement, you can import from Europe, Turkey and other countries tax-exempt, and companies have to decide whether to export from your free trade partners or invest and produce here in Egypt,” noted the ambassador.

In order to invest here in automotive production, Japanese companies have to be sure that it is more rewarding to produce here than to export from free trade partners, affirmed the ambassador.

Additionally, the ambassador said that Egypt is a marvellous touristic destination, adding that the Japanese population aims to see the pyramids once in a lifetime at least, as it is huge attraction despite the distance.

The security situation is improving which is why Japan lowered the travel advice level, including Cairo and coastal areas in Red Sea informing the Japanese to take basic safety measures and enjoy their stay, mentioned the ambassador.

The ambassador said that Japan Association on Travel Agents (JATA) is organising a visit to Egypt, adding, “I encouraged JATA to come to Egypt as early as possible. JATA is a private organisation grouping most of the Japanese travel agencies, I also asked the ministry of tourism to send someone top-level to come to Egypt.”

We seek to implement projects with Egypt in health, energy fields: Japanese ambassador