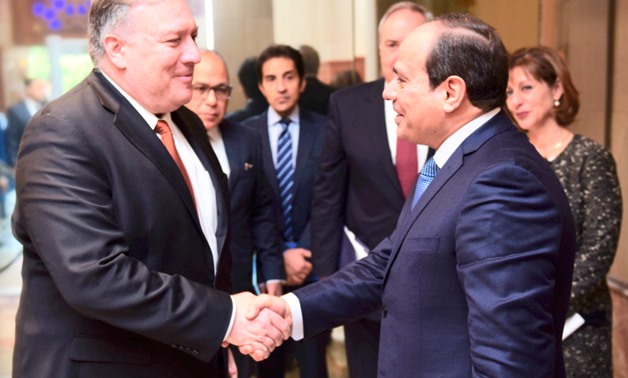 President Abdel Fattah Al-Sisi met US Secretary of State Mike Pompeo in Cairo on Thursday, as part of Pompeo’s tour in the Middle East, which included Iraq, Jordan, and Arab Gulf states. It comes after President Trump’s announcement of his plans to withdraw US forces from Syria.

After the meeting, Pompeo tweeted that the US stands firmly with Egypt in its commitments to protect religious freedoms and the fight against terrorism.

Following the meeting, they held a press conference in which Shoukry expressed that the meeting with the US Secretary of State was a strategic one during which they were involved in various consultations, including increasing commercial cooperation, and holding strategic meetings, as well as 2+2 talks.

The meeting also addressed means of countering attempts of certain regional countries to expand their influence, Shoukry stated. He added that they discussed the GERD and the importance of preserving Egypt’s interest as well as that of Ethiopia and all concerned parties.

Pompeo stated that he discussed with his Egyptian counterpart the need to maintain dialogue with NGOs. He also added that the US has succeeded in eliminating the Islamic State (IS) group by 99%.

As a US Secretary of State, it was the very first time to have a US official, Pompeo, call the Muslim Brotherhood a terrorist group, when mentioning the terror threat in the region.

US authorises release of $1.2bn in military aid to Egypt