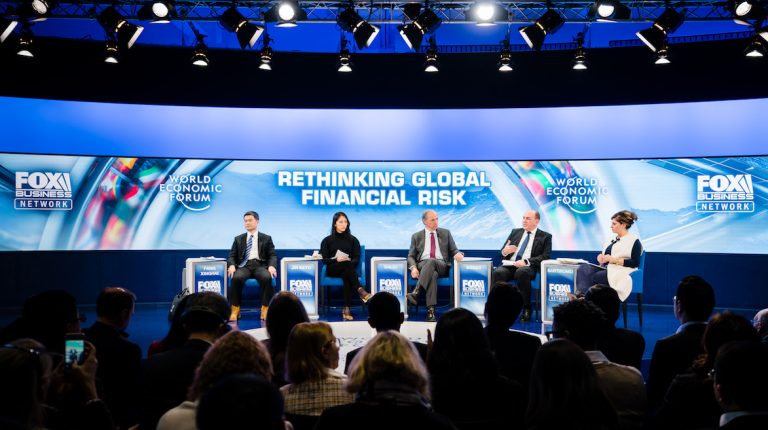 Davos – Slowing growth rates are everywhere, and they could pose risks for the global economy in 2019, a plenty of experts predicted flattening or declining rates for economies across the globe from the United States to Europe and China.

During the World Economic Forum’s first day, business leaders aimed to tackle how can the issue of economic slowdown be solved?

Fang Xinghai, Vice-Chairperson of the China Securities Regulatory, noted that the ongoing economic slowdown in China is not a collapse, adding that China targets a 6% GDP growth in 2019, which is still relatively strong.

He explained that declines in overheated sectors, such as real estate and infrastructure, could provide useful correctives for the market.

Moreover, the recent trade dispute between the United States and China has come as a benefit in disguise, said Jin Keyu, professor of economics at London School of Economics and Political Science.

Jin argued that the dispute has put external pressure on China to make the needed reforms and open its economy.

He elaborated that a plenty of China’s credit remains in the financial sector or goes to state-owned enterprises, which would be reversed through implementing reforms to make credit more available to Chinese households which could help unleash the full potential of the private sector.

This also could lead to an increase in consumption in the Chinese household sector and curb the declining consumer demand in other nations.

On the other hand, the Chairperson of Bridgewater Associates, Ray Dalio, believes that high levels of government debt in the United States pose a great risk to the global economy.

“We have a real problem in terms of the volume of debt we owe to the world over the next several years,” he added.

Historically, China has been a major international buyer of the US debt, but the recent trade dispute has raised questions about bilateral relations. Fang predicted that the political dispute would not affect the Chinese government’s interest in buying the US debt. “I don’t think China will in any way significantly reduce its investment into the US bond market,” he noted.

Experts forecast that monetary easing, accompanied with fiscal reforms, could offset the slowdown, yet with the interest rates remaining at post-financial crisis levels, there are questions about how much room central banks have to manoeuvre.

Alex Weber, chairperson at UBS, a Swiss multinational investment bank, predicted one or two rate hikes from the US Federal Reserve in 2019, but an aggressive tightening would be unlikely, given the softness of the global economy. “I think monetary policy normalisation is not an issue for this cycle. It’s an issue for the next cycle,” Weber noted.

Soft but stable growth characterised the general outlook for 2019, but experts noted that a range of serious risks still exist on the periphery, such as a “hard exit” of Britain from the European Union, climate change, and cybersecurity.

Planned cybersecurity centre will monitor any digital fraud in banks

2019 is year of challenges, opportunities for banks

Changing narrative on Egyptian tourism in WEF 2019: Minister of Tourism