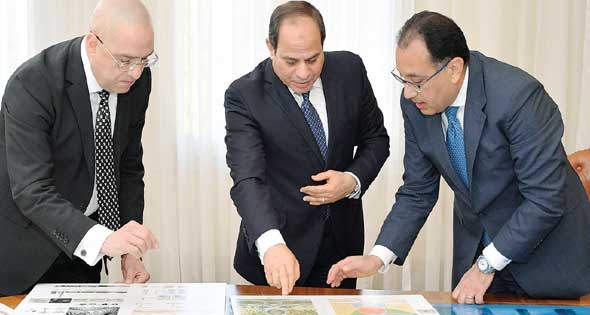 During a meeting with the Prime Minister Mostafa Madbouly and the Housing Minister Assem El-Gazar on Saturday, Al-Sisi called for continuing development of the country’s infrastructure, including projects of road networks, sewage, and other utilities to ensure a decent life for Egyptians.

The meeting tackled future plans of the Housing Ministry as well as the situation of new urban projects which are expected to be concluded during the current year. The projects include the fourth-generation cities, developing unsafe areas and projects of sewage and water.

Al-Sisi further called on state officials to provide best services for Egyptians in the Cairo New Administrative Capital and other new cities across the country.

For his part, El-Gazar showcased the updates of housing projects in several new cities across the country, including the New Administrative Capital, New Mansoura City, and New El Alamein City as well as the proposed new Rashid city.

El-Gazar also mentioned the state efforts in eliminating unsafe residential buildings in Egypt by the end of 2019 through replacing them with around 220,000 housing units.

Army to assist in development of Egypt’s railway: Al-Sisi

Road development continues to be GCC’s top priority with projects worth over $122bn: report