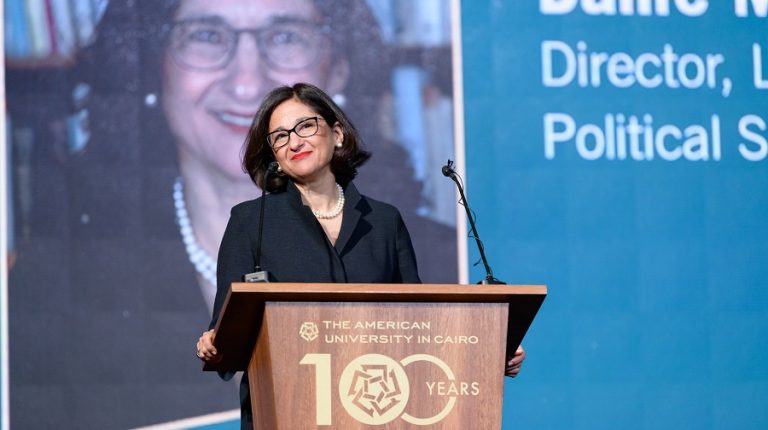 Nemat Shafik, also known as Minouche Shafik, is an Egyptian economist who currently occupies the position of the Director of the London School of Economics and Political Science (LSE) and the first woman in the school’s history to hold this position. She was the guest speaker in the annual Nadia Younes memorial at the American University in Cairo’s Greek Campus last week. Shafik delivered a lecture where she spoke about several aspects of her career and shared her experiences during her work as deputy governor of the Bank of England, as well as her work in the World Bank and the International Monetary Fund (IMF). Shafik discussed the situation of the Egyptian economy and the way changes have been affecting citizens.

Speaking about how luck can affect a person’s life and career as opposed to effort, Shafik discussed Egypt’s case, saying “contrary to popular perception, inequality in Egypt is actually quite low by international standards in part because states in the Middle East have tended to be highly redistributive.”

She also said that introducing programmes to provide needier families with cash in Egypt, like Takaful and Karama, have been hugely important for making sure that nearly between 1.5-2 million families – the poorest in Egypt – have a minimum income that enables them to spend money on things like education and more nutritious food. “But while the gap between rich and poor in Egypt has actually shrunk. The middle class has done relatively worse.” In the last decade, the percentage of downwardly mobile Egyptians has actually exceeded the number of upwardly mobile Egyptians, she added.

Shafik noted, therefore, luck has become more important than effort in driving a person’s success, which may be a main factor contributing to the observed decline in life satisfaction of citizens in many polls in Egypt.

Furthermore, Shafik pointed out that in most societies, there is a noticeable decline in social mobility in recent decades. “I think much of the current malaise we see in countries like Egypt, the United States, and the United Kingdom is because of that. Spreading opportunity through education, throughout life, fairer job opportunities and more real competition, is probably the biggest social challenge that we face. But addressing it is also vital for our economic success. Since getting the most out of our talent is the path to greater prosperity.”

Shafik concluded the lecture by answering a few questions by the attendees who included several public figures, university professors, and students.

IMF delegation to visit Egypt in May: Lall