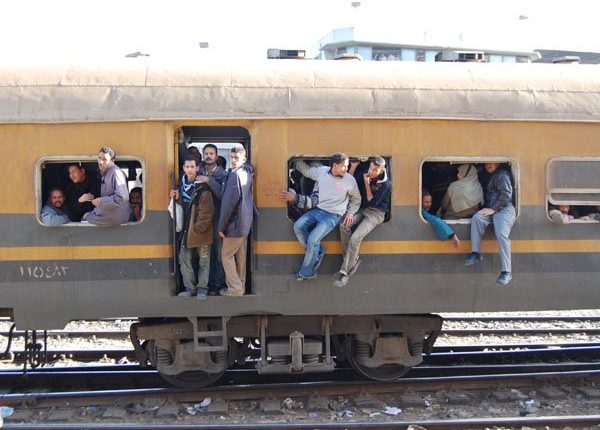 The Egyptian National Railways (ENR) announced on Monday several new fines on commuters who do not book tickets prior to their trips, starting from the beginning of April.

Other forfeits are imposed on a number of “violations”, including train surfing or carrying heavy and huge luggage that might bother travellers or impede their movements inside trains.

The fines imposed on travellers having no tickets will be EGP 30 in VIP trains, EGP 20 in air-conditioned French and Spanish trains, and EGP 10 in the multiple stops-trains (the semi-affordable transportations for underprivileged workers and students).

Meanwhile, the violations or wrongdoings include fines worth EGP 50 on whoever steps out of trains while they are moving or stopping, EGP 50 on whoever enters the stations without tickets, and EGP 50 on people who litter or spit inside trains or railway stations.

The fines on surfing the trains are set to be EGP 200, while carrying heavy or “disturbing” luggage will require a fine of EGP 210.

The recent moves taken by the ENR followed the appointment of the new Minister of Transportation, Kamel El-Wazir, who pledged to improve the railways which have been suffering from lacking safety standards for many decades.

At the end of February, Cairo Railway Station witnessed one of the deadliest accidents in the history of the railway, when a locomotive smashed through a buffer stop, killing 25 people and injuring around 50 others, including some with severe wounds.

“Most of the times people have to board trains without tickets because they do not have any available at the ticket windows where employees refuse to sell them ones,” Salma Lotfi, who depends on travelling by trains on regular basis to head to Alexandria from Cairo told Daily News Egypt. “Then, when you take the train, you are surprised that there are too many empty chairs.”

Lotfi noted that if the ENR wants to impose fines on commuters who do not have tickets, then they should increase the numbers of trains, so that people will not have to board trains without tickets.

Meanwhile, Ahmed Sabry said that the fine nearly equalled the price of the whole ticket to his hometown Tanta from Cairo (EGP 20) “It is too much. People cannot afford this,” Sabry told DNE.

Sabry added that the problem lies with the commuters’ having to ride the trains without tickets because when they try to book tickets, sometimes they do not find any. He added, “If the ENR want to impose fines, this has to be in exchange with improving the services and increasing the number of trains.”

Furthermore, Sabry highlighted that the burden will be more on the commuters of the multiple stops-trains, as most of them usually do not book tickets before boarding which cost them around EGP 5.5 to travel to Tanta from Cairo. “When you impose EGP 10 on their tickets, the price will be EGP 15.5. Then it will not be any more affordable for them.”

Sabry added that from his personal experience, each railway inside these trains might have 200 travellers (Every car nearly has 50 or 60 chairs). He finally stated, “I do not mind increasing the prices of tickets if we enjoy better services.”

EBRD to roll out programme to develop Egyptian municipalities’ infrastructure