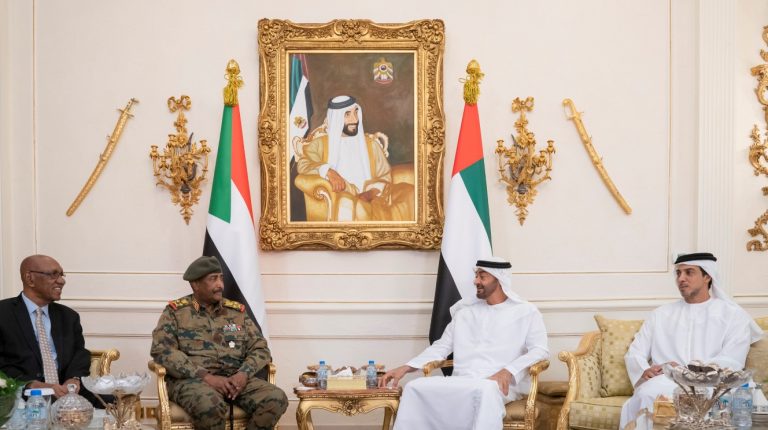 Burhan’s visit came after he met with Egyptian President Abdel Fattah Al-Sisi and top country officials in Cairo regarding the recent updates in Sudan following the suspension of talks between the Sudanese generals and protest leaders.

During the Sunday meeting in Abu Dhabi, bin Zayed asserted that the UAE “will back Sudan while passing through current circumstances and transformations to achieve a peaceful political transition,” WAM stated.

Furthermore, bin Zayed affirmed the significance of the dialogue between all interlocutors to overcome this period and fulfil the demands of the Sudanese people, and maintain stability and security in the country, WAM added.

“Dialogue is important in this critical moment Sudan is passing through,” WAM citied bin Zayed who added, “With dialogue, Sudan will reach national reconciliation, realise its aspirations, strengthen its stability, and usher in a new prosperous chapter with confident steps toward the future.”

The UAE was among other Arab countries such as Egypt and Saudi Arabia that announced their support of Burhan after he seized power last month, following the toppling of former President Omar Al-Bashir.

Earlier, the UAE vowed to coordinate with Sudan on needed aids, such as food, medications, and oil. Both the UAE and Saudi Arabia declared that they will provide Khartoum with $3bn aids.

Burhan began his first foreign trip after the Sudanese protest groups called for a two-day strike on Tuesday and Wednesday, 28-29 May, to achieve the aspirations and the demands of the Sudanese revolution.

The Declaration of Freedom and Change Forces affirmed that the strike is a peaceful resistance which aims to achieve the goals of the revolution and hand over the power to a civil-led government.

Over months, Sudanese people of a wide spectrum of society swept into the streets in large numbers to initially protest against the high increase in the cost of living. Then, they demanded the toppling of Al-Bashir and his regime, who has been in power since 1989.