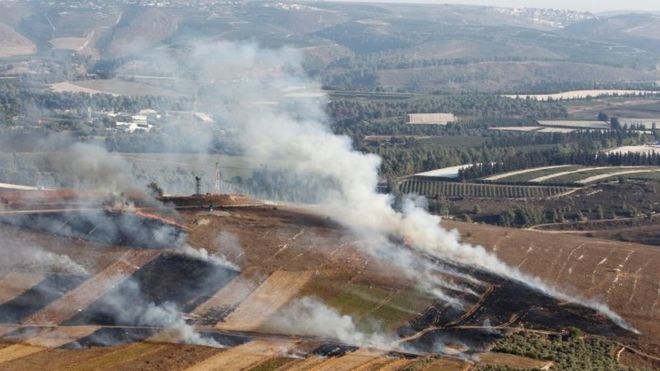 The Israeli army declared the end of the exchange of fire with Hezbollah which erupted on the border area with Lebanon on Sunday. Al-Manar Television of Hezbollah also announced that shelling stopped.

Two or three anti-tank missiles were fired from southern Lebanon and targeted an army base and military vehicles in northern Israel, the Israeli army said. Hezbollah has already claimed the missile attack.

“We returned fire toward the source of the attack in southern Lebanon,” Israel continued.

No Israelis were injured in the attack, Israel said. On the contrary, Hezbollah said that its fighters killed and injured people inside the army base and the vehicles in Avivim.

Prime Minister Benjamin Netanyahu also confirmed on Sunday that Israel responded with 100 shells, aerial fire and various measures into Lebanese territory. He also announced that there were no casualties in the Israeli side.

Netanyahu also added that Israel is ready “for any scenario,” in the aftermath of the tensions with Hezbollah.

However, Al-Manar television published a report and rebutted Netanyahu’s announcement with footage it said that Israeli websites circulated and showed the wounded.

Israeli media and correspondents said that the videos that showed helicopters evacuating the wounded were a “deception” from the army “to make Hezbollah think it injured soldiers.”

Earlier on Sunday, the Lebanese army said that an Israeli drone entered the Lebanese airspace and threw incendiary materials on a forest along the borders.

Tensions have been escalating on the frontier since a drone hit a Hezbollah stronghold and another crashed near south Beirut last week as Hezbollah accused Israel of being behind it.

The United Nations peacekeeping force in southern Lebanon has called on Israel and Hezbollah to exercise restraint following the exchange of fire along the borders on Sunday.

No red lines in defending Lebanon against any Israeli aggression: Nasrallah

Netanyahu warns Nasrallah to ‘calm down’ after drone incident