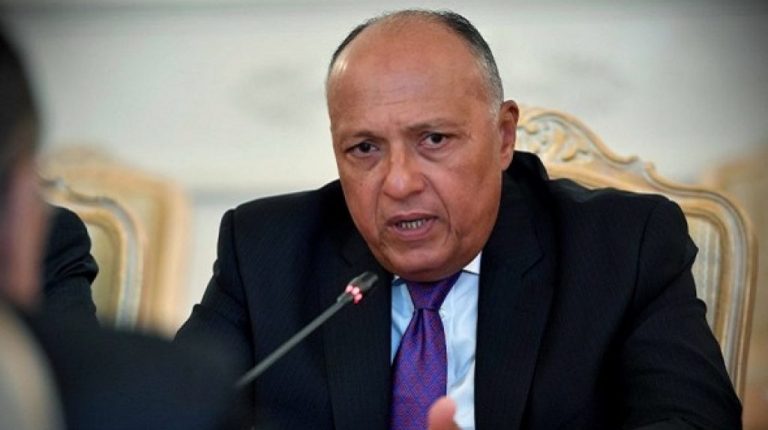 Egypt’s Foreign Minister Sameh Shoukry said the Nile water for Egyptians is matter of life and death, referring to the construction of the Grand Ethiopian Renaissance Dam (GERD) in a press statement to Al-Monitor on Monday.

The minister explained that Egypt is 95% desert and that 100 million Egyptians rely on the 55 billion cubic meters of Nile water.

Shoukry said that although Egypt recognises Ethiopia’s right in development, he does not think that anybody would agree that this development should come at the expense of the lives of Egyptians.

He also stated that the three countries have to come up with results that abide with the Declaration of Principles signed in 2015 to ensure access to the Nile water for Egypt, Ethiopia, and Sudan.

The minister also expressed his frustration for the stance of the Ethiopian side, stating that they should have clarified their reasons for objections instead of completely rejecting the proposal.

Ethiopian foreign ministry, previously said that the timeframe of the mega hydroelectric dam project proposed by Egypt “ignores the procedure of the tripartite negotiation and obtrudes from the system” and does not “respect current and future rights and development plans of Ethiopia over the Nile and complicates the filling of the dam.”

Moreover, last Friday, Ethiopia’s foreign ministry said in a statement that it rejects Egypt’s latest proposal as it comes against the sovereignty of Ethiopia. Commenting on this remark, Shoukry said that Egypt has no intention or desire to infringe on anyone’s sovereignty, but neither will it accept any violations of its own sovereignty.

Shoukry said that this issue is a scientific one and should not be taken in political context, stressing that after four years of negotiations, this issue must be resolved.

As proof of Egypt’s good intentions, Shoukry referred to the country’s previous proposal to leave the issue for World Bank experts to address in a scientific manner.

Last week, Egypt, Sudan, and Ethiopia met to discuss GERD, and were unable to reach any satisfactory solution for the issue. During the meeting, Addis Ababa rejected “without discussion” Egypt’s vision regarding the rules of filling and operating the GERD.

The filling and operating period of the GERD is the main problematic issue between the parties who failed to reach solutions to the issue amid the Ethiopian insistence on storage within a period of three years, while Egypt requests a 7-year- filing period.