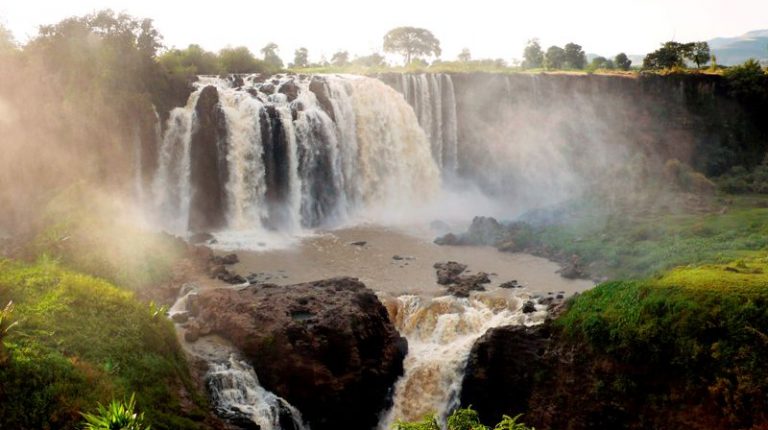 In the tenth century, Al-Hakim bi-Amr Allah – the sixth Fatimid caliph of Egypt – witnessed a significant problem as a water shortage crisis emerged in the country due to a severe decline in the River Nile’s levels at the time.

The Nile has a significance value for the Egyptians as it was the secret of the country’s ancient civilisation. To address the water shortage at the time, the Fatimid caliph thought about damming the river, and assigned the famous Arab mathematician and physicist Al-Hassan Ibn Al-Haytham to work on it. Proved to be an engineering challenge,  Ibn Al-Haytham has feigned illness to avoid the caliph’s wrath and punishment.

Over hundreds of years since this plan, Egypt’s rulers built numerous small dams and bridges until the establishment of the Aswan High Dam in the 1960s.

The Nile is Egypt’s lifeblood, as the country depends on its share to secure the Nile River Basin’s most populated country’s needs of water, by about 97%. This amount of water equals only 660 cubic metres (cm) per person, one of the world’s lowest annual per capita water share.

But as population is expected to double in the next 50 years, Egypt is projected to have a critical countrywide fresh water and food shortages by 2025, according to a study conducted by the Geological Society of America (GSA). 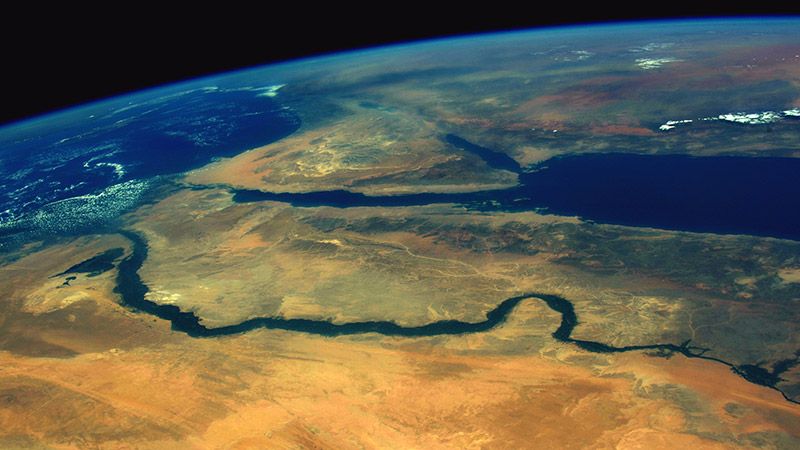 In the upcoming 30 years, Egypt’s population is estimated to reach 150 million which will lead to a decrease in the per capita share of water to be 350 cm/year.

Now, Egypt is under pressure of the Grand Ethiopian Renaissance Dam (GERD), but it still has some few choices to cope with the crisis, owing to science for bringing up most of these solutions.

Nowadays, Egypt is not fearing the floods of the river, but the mass hydraulic constructions by upstream countries such as the GERD which is 60% complete, and will be Africa’s largest hydroelectric dam on the Nile.

Negotiations between the three main concerned countries over the GERD; Egypt, Ethiopia, and Sudan, had reached a deadlock, particularly between Egypt and Ethiopia.

Egypt receives about 70% of its water flow from the Blue Nile and Atbara River, both sourced in the Ethiopian plateau, then merge as the main Nile in the northern Sudan.

Operation and filling period of the GERD are the main problematic issues between the concerned parties to reach solutions to amid the Ethiopian insistence on storage within a period of three years while Egypt requests a 7-year filing period.

Egypt’s Ministry of Irrigation blamed Ethiopia for the failure of negotiations, saying that Addis Ababa surprised the attendees of the trilateral technical meeting in Khartoum early this month, with a new proposal against all the previous agreements regarding the filing and operating rules of the GERD.

Addis Ababa argues that the GERD is essential for its societal and economic development because two-thirds of the country has been suffering from electricity shortage for too long.

According to the Ministry of Irrigation, the Ethiopian proposal excluded any guarantees for an annual discharge from the GERD, and dealing with future droughts and protracted droughts.

Ethiopia also refused to discuss the rules of operating the dam, and insisted on limiting the negotiations of the filling phase and the rules of operation only during the filling phase. The Ethiopian stance contradicts the fifth article of the Declaration of Principles Agreement signed on 23 March 2015. It also violates the international legislations regarding constructing and managing dams over common rivers.

Regarding Egypt’s further proposal to invite the World Bank (WB) to the negotiations, Salama said that Egypt did not inform the bank before applying the proposal to the Ethiopian side, and he believes that the bank itself would not accept mediation.

In light of the failure of the negotiations, Egypt called for applying the Article 10 of the declaration of principles.

According to the Article 10, “If the parties [three countries] are unable to resolve the dispute through consultation or negotiation, they may jointly request for conciliation, mediation or refer the matter for the consideration of the Heads of State/Heads of Government.”

In response to the Egyptian call, the Sudanese Minister of Water Resources and Irrigation, Yasser Abbas, rejected involving any fourth party into the negotiations, affirming his country’s trust in the current committee to reach a solution for the issue.

Meanwhile, the United States issued a statement seconding the three countries in their negotiations to reach a cooperative, sustainable, and mutually beneficial agreement on filling and operating the GERD. 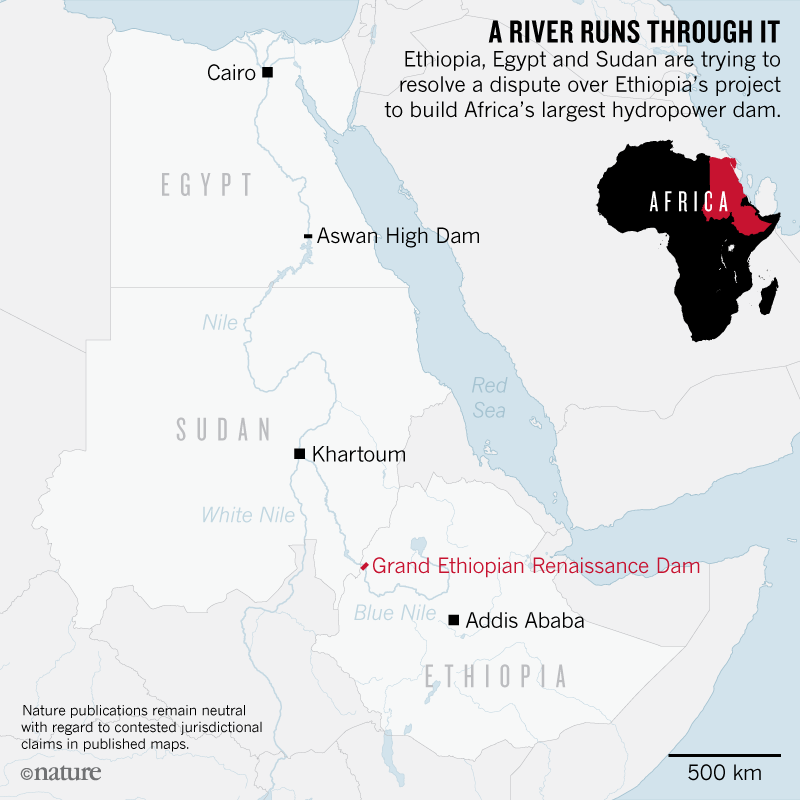 One of Egypt’s expected solutions for the water crisis is recycling the drainage water. Egypt’s Minister of Water Resources and Irrigation Mohamed Abdel Aty, said recently that the country is to invest in expanding its use of treated drainage water to be able to cope with the water shortage and other water-related disruptions.

“In Egypt, 10% of agricultural water is recycled drainage water, and that success could be matched in other countries where there is large-scale surface irrigation,” a recent joint report of the WB  and the United Nations Food and Agriculture Organization (FAO).

According to the report, Egypt set up a successful example that reusing the drainage water as unusual source of water could be effective and cheap.

The report pointed out Egypt’s approach of decentralising the responsibility of water management to local areas, for example, at Salheia city in the East Delta where a local groundwater association established a common management system and invested in a piped network, and now manages the aquifer sustainably.

It highlighted the importance of achieving better understanding to the dynamics of water management, to ensure that water does not add to fragility, but rather promotes stability, and contributes to resilience in the region.

The report also called for redoubling efforts towards sustainable and efficient management of water resources, reliable and affordable delivery of water services to all, and protection from water-related catastrophes.

Depending on the country’s ground water reservoir as well as desalinating the seawater could also be an additional solution to meet the domestic demand for water. A new study pointed out that the domestic water sector is one of the largest water users in Egypt, which consumes more than 16% of the total renewable water resources.

Egypt is urgently required to have its plan to face the increase in the current consumption of domestic water from around 9.2bn cm in 2016 to about 15bn cm of water by 2040 from alternatives to the Nile waters, according to findings of the study that was published in the American Journal of Engineering Research (AJER).

According to the study, domestic water in Egypt is diverted from two main sources. The first source is surface water (SW) which supplies about 88.99% and the second one is groundwater, which supplies about 10.77% of total demands, and about 0.24% from sea water desalination. The major factor that affects the amount of diverted water for domestic use is the efficiency of the delivery networks.

Osama Sallam, the author of the study and researcher at the Egyptian National Water Research Centre told DNE, “the groundwater and seawater desalination are together promising sources for meeting the future water needs of Egypt. By 2040, Egypt will need additional 5bn cm to meet the domestic use of water to reach the needed amount 15bn cm.”

Sallam illustrated that the Egyptian groundwater reservoir is fresh and has a low level of salinity, thus allows meeting the future demand of domestic water, and is also cheaper than seawater desalination.

He further added that the process of seawater desalination is very expensive and the cost of desalinating one cubic meter of water costs $1,000 in addition to $1 for other costs of operating and maintenance.

The researcher explained that this process is the promising source of water for coastal governorates particularly when Egypt rely on cheaper sources for energy, that will help in decreasing the cost of desalination.

One of the important Egyptian experiences in cultivating drought-tolerant crops was by Said Soliman, a professor of genetics at the Faculty of Agriculture, Zagazig University. He was working for a long time in progressing new species of rice that resist drought and use less amount of water.

Speaking to DNE, Soliman said that he has developed a new species of rice, named “Oraby” after the iconic army leader Ahmed Oraby. This species of engineered rice takes about 120 days to grow, compared to 145 days for normal rice. He added that Oraby rice could be cultivated twice in the year.

Oraby rice could be cultivated in all kinds of land, as it was successfully cultivated in Toshka project, Aswan governorate, in both sandy and clay soils.

According to Soliman, it is possible to cultivate 2m feddan of the engineered rice with the same amount of water which is allocated to irrigate 1m feddan of normal rice. Oraby rice will achieve increase in productivity by 2m tonnes of rice, meaning 1 tonne per feddan.

Most of Egypt’s land is desert, about 97 % of the country’s area. Actually, Egypt is just a desert with a very tiny line of water which crosses its land from south to north, the River Nile. However, the desert could hold a solution, and could also be a source of water.

For arid countries like Egypt, scientists at University of California, Berkeley, have developed a device that produces water from dry desert air, using sunlight only.

The method depends on developing a molecular powder, a metal–organic framework (MOF), that is highly porous and acts like a sponge to absorb water.

According to the study which was published by Science Advances journal, the powder saturated with water during moist and cool night after it was packed in a frame at a plexiglass box.

After that it releases water as sunlight heats it during the day, and then the resulted water condenses on the side of the box which was kept open at night and closed in the day. The process takes 24 hours (a normal day), and could be also an additional solution for the water crisis in arid countries.

Ethiopia completes about 70% of GERD constructions

Less than 5% of Egyptians suffer undernourishment, while 30% are obese: FAO

Egypt expresses discontent from Germany, Italy, and China for participating in GERD establishment