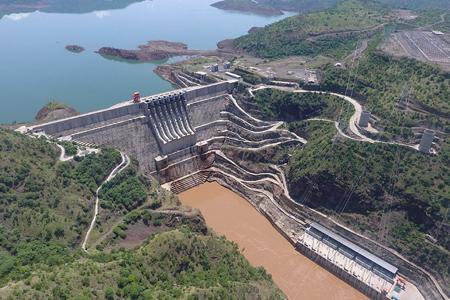 In a Tuesday statement, the Egyptian Foreign Ministry expressed its concerns over such remarks that referred to “military options,” noting that it violates the values of the African Union, especially that Egypt did not address the issue of the dam at any time only through negotiations based on international law and international legitimacy.

“Egypt always relies on negotiations as a way to settle disputes over the GERD between the three countries, with transparency and good intention over many years,” the statement read.

Egypt also expressed its astonishment that such statements came only days after Ethiopia’s Prime Minister won the Nobel Peace Prize, which, the ministry said, should push Addis Abba to show the political will and flexibility needed to reach a binding comprehensive legal agreement that takes into accounts the interests of the three countries, the statement added.

Meanwhile, Egypt revealed that it has received an invitation from the United States administration for a meeting with Sudan and Ethiopia’s foreign ministers in Washington to discuss recent deadlock in GERD negotiations, which Egypt accepted, the statement clarified. The date of the upcoming meeting has not been specified yet.

Earlier on Tuesday, the Ethiopian PM raised controversy after his statements about possibly resorting to force over the GERD issue. Ahmed said that his country is ready to “mobilise millions,” and “ if some fire a missile, others could use bombs, but this is not an interest of any of us,” Ahmed said according to Associated Press.

Ahmed affirmed that no power could halt the completion of the GERD; however he said that only negotiations would solve the dispute over the dam. His ‘remarks came during a parliament hearing on Tuesday over the GERD.

Egypt has kept urging an international meditation to reach a fair agreement on the filling and operating the dam, following the negotiation deadlock.

President Abdel Fattah Al-Sisi is expected to meet with Ahmed on the sidelines of the Russia-Africa Summit in Russia’s Sochi which kicked off on Wednesday.

Abiy Ahmed: wide reforms, but some sceptic over unsettled issues