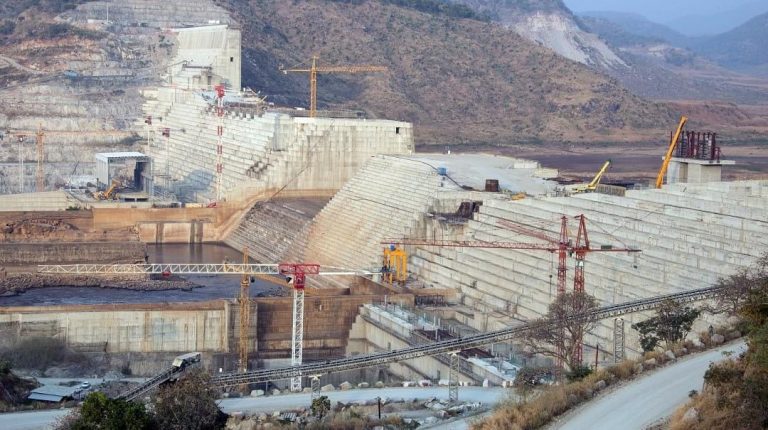 Egypt’s Foreign Minister Sameh Shoukry said the US has invited Egypt, Ethiopia, and Sudan for a meeting on 6 November in Washington to break the deadlock over the Grand Ethiopian Renaissance Dam (GERD) during a press conference with German counterpart Heiko Maas on Tuesday.

The Egyptian Foreign Minister pointed out that Egypt considers the importance of continuing the work to reach an agreement between the three countries in accordance with the principles signed over the Ethiopian Dam, stressing Egypt’s refusal to impose a fait accompli which will affect the stability of other countries.

GERD is a fundamental issue for Egypt, and an issue of life, Shoukry said, stressing that the issue of the GERD is linked to the lives of 100 million Egyptians, and therefore it is of a great importance.

Shoukry said the state of Egypt seeks to resolve all issues through diplomatic channels and to find a solution that achieves the interests of the three countries without making any impact on the interests of other countries.

Egypt’s foreign ministry said last week that the next meeting between the foreign ministers of the three countries will be held in Washington.

“Egypt has received an invitation from the U.S. administration,” the ministry said in a statement, adding, “an invitation that Egypt immediately accepted.”

No comment yet from Ethiopia or Sudan over their attendance to the US-sponsored meeting. Ethiopia was never supportive about the possibility of receiving mediation to join the negotiations.

Tensions escalated between Cairo and Addis Ababa in recent days after the Ethiopian Prime Minister said that his country is ready to “mobilise millions” if there is a need to go to war with Egypt over the GERD, but only negotiations would resolve the dispute.

Shoukry has previously called the international community to mediate between Cairo and Addis Ababa to reach a final and fair agreement on the process of filling and operating the dam.

However, Ethiopia previously announced that it refuses to involve an international party, arguing that it defends its right to development, saying it will never harm the interests of Egypt or Sudan.

While Maas stressed the importance of solving the issue of the GERD by reaching an agreement, expressing hope that the dialogue will lead to a result, he also stressed that his country needs Egypt’s support to reach a sustainable solution in Libya in the success of the coming Berlin conference, which will offer a political solution to the crisis.
The German foreign minister stressed that his country appreciates Egypt’s great role in the Middle East and its role in Palestinian reconciliation, pointing out that the situation in Syria and Sudan was discussed.

In a similar context, Shoukry affirmed Egypt’s interest in continuing coordination with Germany, given its role in the framework of bilateral relations and its international status as a member in the European Union.

The foreign minister also noted that his bilateral with Egypt dealt with consultations on regional issues affecting security and the Palestinian issue on the basis for resolving the issue in accordance with international legitimacy resolutions, in addition to consulting the situation in Libya to find a solution and an exit consistent with the political framework of UN resolutions.
The foreign minister said that they discussed the situation in Syria, Lebanon, and Iraq and stressed that the issue of terrorism was one of the important issues discussed.

Cairo Declaration as a conclusive solution to Libyan crises: Kremlin

Shoukry meets US congressmen ahead of GERD mediation meeting in Washington