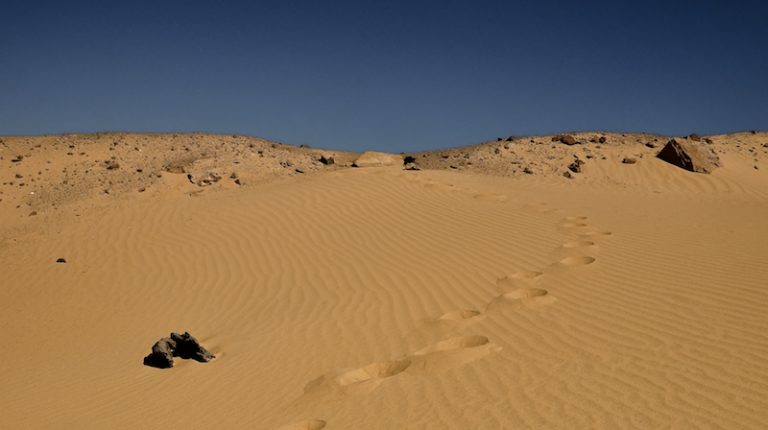 Egypt is confronting increasing security challenges in its western region and along its extensive border with Libya, as the conflict in its strife-torn neighbouring country escalates.

Amid the intensifying influx of Turkish-supported mercenaries in Libya, and a possible military operation in the northern city of Sirte, Egypt faces growing threats along its western border. It brings to mind threats posed by militant groups such as those allied to Al-Qaeda, Al-Mourabitoun, and Ansar al-Islam.

The vast Western Desert has remained a security concern for Egypt, as its desolate terrain makes it attractive to militants, and has opened up a new front in the fight against terrorism.

The prolonged conflict and political vacuum in Libya that followed the 2011 fall of the country’s former leader, Muammar Qaddafi, has increased these threats. Not only has it turned Libya into a bloody battlefield between different militias and terrorist groups, but it has also created a divided government backed by a myriad of international players.

The oil-rich country has been split between two parties since 2014: the Government of National Accord (GNA) which is based in the capital Tripoli and backed by Turkey, and the Benghazi-based Libyan Arab Armed Forces (LAAF), which is backed by Egypt, the UAE, and Russia.

The escalations in the Libya conflict, whilst depressing for the country itself, also has the knock-on effect of making Egypt’s western border a passageway for illegal activities. Egypt has been undertaking its own struggle to combat arms smuggling and the infiltration of terrorists and organised crime groups into the country.

Egypt’s military and police forces have launched several military operations to counter these threats, the most important of which was a campaign titled “Sinai 2018”. The campaign aimed to confront militants in Central and North Sinai, the Nile Delta region, and the Western Desert.


Hundreds of police and army personnel have been killed in the last seven years in terrorist attacks, mostly claimed by Wilayat Sinai (Sinai Province), an Islamic State (IS) affiliated group in Sinai.

Since the ouster of Egypt’s Islamist President Mohamed Morsi in June 2013, other terrorist groups have emerged, such as Hassm and Liwaa Al-Thawra, both of which have indicated a connection with the Muslim Brotherhood group. Al-Qaeda-allied groups, such as Ansar al-Islam and Al-Morabitoon, have also been established.

Al-Morabitoon is a militant group formed by Egyptian former army officer-turned-militant Hisham Al-Ashmawy in Derna, Libya. He is believed to have connections with Ansar al-Islam, to which his friend and fellow army officer-turned-jihadist Emad Al-Din Abdel Hameed claimed allegiance.

attack on the Farafra checkpoint, near the Egyptian-Libyan border, which killed 22 soldiers in July 2014 as well as other attacks.

“The facts and figures during the last few years show that Egypt has faced threats from its western borders and that many police and military officers were killed in terrorist attacks,” Khaled Okasha, an Egyptian security expert and General Director of the Egyptian Center for Strategic Studies (ECSS), told Daily News Egypt.

Amid the current situation in Libya tense and Turkey increasing its support to the GNA in preparation for a potential battle in Sirte, Egypt’s Armed Forces have been on high alert. They have also declared their preparedness for any outside missions to protect the country’s borders and national security.


Only last week, Egypt’s Parliament gave its approval to sending the country’s troops on missions outside the country’s borders, following calls made by the Libyan parliament in Tobruk and Libyan tribes.

In the meantime, Egypt has set a red line in the area surrounding the Libyan cities of Sirte and Jufra, and that it will never stand  idly if any forces or militias crossed the metaphorical line.

Egypt’s stance comes from its desire to protect its western borders with Libya from the threats posed by mercenaries and militias sent to its neighbour by Turkey, which has done little to hide its intentions. The Turkish move has also brought Libya back into the global limelight.

“Egypt’s move aims to combat militias, mercenaries, and terrorists that threaten Egyptian (western) borders,” Okasha said. “The deteriorating (security) in Libya makes Egypt feels that this (terrorism) is being reproduced but in a higher degree of severity after the situation settled to some extent in the past few years.”

Okasha added that Turkey’s deployment of mercenaries and armed militias in Libya, to which it has also provided support, training and the leadership of its own officers, leaves no doubt that there is a direct threat to Egypt’s national security.

He noted that Egypt will send its armed forces into the field if need be, adding that Egypt is prepared to “fight by itself”. Military commanders will make the call on whether to take part in this battle with airstrikes or troops, based on the situation.

“If Turkey expanded or spread outside the west of Libya to central or south Libya, Egypt will not stand idly because this threatens its national security,” Okasha said.

He also said that the US stance regarding the conflict in Libya is “confusing, unclear, and divided.” This is due, in part, to the exceptional period ahead of the upcoming elections in the US, and the ongoing crisis caused by the novel coronavirus (COVID-19) crisis.


“I believe this is the reason Turkish President Recep Tayyip Erdoğan has chosen this time to make his latest moves in Libya, because he is trying to take advantage of these months to achieve the biggest possible gains,” Okasha said.

The past few weeks have witnessed growing military mobilisation around the northern Libyan city of Sirte, as Turkey prepares a possible military operation in the city.

The GNA is receiving increasing support from Turkey, which has provided drones and air defence systems, weapons, as well as thousands of mercenaries from Syria and other countries. In recent months, the GNA has also seized the Al-Watiya airbase, a key military installation south of Tripoli, and Tarhuna city, leading to its taking control over west Libya.

Egypt faces bigger threats than before


Turkey has so far deployed about 16,500 Syrian mercenaries to fight in Libya, according to the Syrian Observatory for Human Rights (SOHR). Reports also suggest that Ankara is bringing in Tunisian militants, including IS fighters, in addition to providing training to Somali militants to fight alongside the GNA.

Ali Al-Takbali, a member of the Libyan Parliament’s defence and national security committee, told Daily News Egypt that Turkey continues to bring in IS militants to Libya. He added that there are now are about 2,500 IS fighters in the war-torn country’s western region.

“Turkey is also training Somali militants to bring them to Libya, which means that Turkey has no intention of getting out of Libya,” Al-Takbali said.

However, Egyptian MP and Director of the Middle East Forum for Strategic Studies, Samir Ghattas, told Daily News Egypt he doubts that IS militants are fighting with the GNA.


“Turkey will not risk losing its allies and bringing in IS to Libya to fight with the GNA,” he said, “Additionally, there is a state of hostility between IS and militias from Misrata loyal to the GNA, as there have been clashes between them in the past in Sirte. I do not believe that cooperation could be possible between them.”

Meanwhile, Ghattas said that the threats Egypt currently faces are bigger now compared to the past few years. He noted that militant groups that in Libya, such as IS and Al-Mourabitoun, were small groups that posed a danger rather than a threat.

He also said that these groups, as well as others, were heading to Libya in the past years with Egyptian-born labourers working in the country to receive military training in Libya, before returning to join extremist groups in Egypt.

Ghattas noted that the leadership of former military officers such as Al-Ashmawy and Emad al-Din Abdel Hameed has provided groups such as Al-Mourabitoun and Ansar al-Islam with the degree of threat and danger they posed.

The danger in Derna and Benghazi was not big, and could be deferred and eradicated almost completely, Ghattas noted.

He added that, when Egypt strengthened the protection of its border, infiltration between Libya and Egypt became more difficult, and also between Egypt to Libya due to new restrictions placed on Egyptian labourers.

Ghattas highlighted that the threat is now more significant, due to the backing of states such as Turkey, which is both an ally of the US and also plays a significant role in NATO. Turkey’s relationship with the Gulf state of Qatar, which has frequently been accused of financially supporting militant groups, has also been highlighted.

That both Turkey and Qatar have not hidden their open hostility towards Egypt has done little to shift the uncomfortable focus away from these two states, he added.

Ghattas noted that Turkish support of the Muslim Brotherhood could lead to the revival of militant groups connected with the Islamist group, including Hasm Movement and Liwaa Al-Thawra.

However, he noted, “The great threat is economic, because the existence of Turkey in the Mediterranean region, as well as its illegal drilling activities in the Eastern Mediterranean, represents another threat and a very great disturbance to Egypt.”

Ahmed Ban, a researcher on extremism and jihadist groups, said that there are different militant groups and militias in Libya, including IS, Al-Qaeda, as well as organised crime and tribal groups.

Speaking with Daily News Egypt, Ban said that Libya has become an open space for looting, gangs and militias of all kinds, as well as a prime location for weapons storage. This has been encouraged by the ambitions of external players, such as Turkey, with these circumstances creating a real threat for Egypt due to its extensive border with Libya.


“Over the past few years, we have witnessed the threat posed by groups allied to Al-Qaeda, in particular Al-Ashmawy’s group Al-Mourabitoun,” Ban noted, “This threat remains, but it is exacerbated by the alliance between the Al-Qaeda-allied groups and the remaining ISIS groups that are linked with the Muslim Brotherhood’s Fajr Libya, which in turn is working with Fayez Al-Sarraj’s GNA.”

Ban added that the Libya’s southern region and coastline host a large number of militants and weapons, compounded by the border chaos that has eased their movements across countries.

“This region represents a real threat to the Egyptian state,” Ban added.

Ban explained that Egypt considers the Sirte-Jufra line a red line, because the entry of groups allied to the GNA with its “extremist and Muslim Brotherhood identity and with the support of Turkey…means Egypt views them as the enemy.”

“If we observed the number of vehicles that have been destroyed by Egyptian air forces, or individuals that tried to infiltrate and cross the Egyptian western borders, we will realise the volume and intensity of the threat,” Ban highlighted. “Any government that is serious in defending its national security will not wait until the danger enters its borders, but would combat this danger on the borders and lines that it draws, as Egypt does.”

In the meantime, Ban predicted that a possible battle in Sirte would either be a blitzkrieg or a series of flash battles. He added that the continuation of this battle for an extended period of time means huge costs and extensive supply lines.


Ban concluded, “Turkey can only provide regular troops for the GNA, which is a heterogeneous force that does not reflect the ideology of a single national army, compared to the LAAF which is supported by Egypt and other parties.”

US designates Hasm, IS in Sinai as foreign terrorist organisations