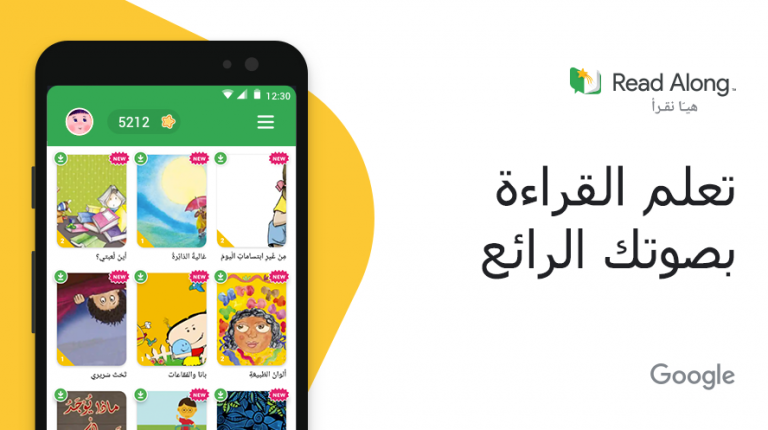 Google has introduced the Arabic version to its free Read Along Android app to help children over five years old independently learn and build their reading skills.

These reading skills will be improved with the help of an in-app reading buddy named Diyya, Google Product Marketing Manager, Nitin Kashyap, announced during a roundtable last week.

As Arabic was the most requested language by the application’s users, Kashyap said, Google decided to include the language on the app’s facilities.

Read Along was launched worldwide in May 2020, whilst many students worldwide were studying from home due to the novel coronavirus (COVID-19) pandemic.

Read Along is a speech-based reading app designed to help primary-school aged children independently learn to read anytime, anywhere. The students can choose from a wide variety of books available on the app, and can develop at their own pace whilst having fun reading, Kashyap explained.

Talking to Daily News Egypt, Kashyap said there are currently no plans for the application to add further skills alongside the reading feature.

He added that the application started with only 50 stories, but now has 180 stories in English and nearly 150 in Hindi. Read Along, which was launched in India in March 2019 prior to its global roll-out.

The application currently supports 10 languages, namely English, Spanish, Portuguese, and Arabic, as well as Urdu, Hindi, Bengali, Tamil, Telugu, and Marathi. Kashyap said that the company is willing to add at least one other language this year, although the exact number of languages to be added has not been decided.

It includes a series of original Arabic stories which focus on values such as empathy and perseverance, with Coco Is Going To The Ball being published at launch. The original stories were written by Googlers from the Middle East, and aim to help expand the variety of Arabic content from the region.

The application, which is free, uses Google’s speech recognition technology and for young readers to share visual and verbal notes while they read books available from around the world. It also works even when users are offline, and does not contain advertisements to avoid distractions.

And after the initial download of the app and stories, Read Along works offline without Wi-Fi or data—helping with worries about unsupervised access to the Internet. Parents can simply connect to Wi-Fi periodically to download additional stories.

Read Along was built with children’s safety and privacy in mind, and has no ads or in-app purchases. Google noted that users’ speech data is safe, as it is processed on the device itself and discarded.

“Read Along is also easy to start and doesn’t require sign in,” Google said of the app, “Even the voice data is analysed in real time on the device, so that it works offline, and is not sent to any Google servers.”

Diyya has speech recognition technology, and can correct users when needed. It also encourages children the same way a parent or teacher would.

As kids read out loud, Diyya uses Google’s text-to-speech and speech recognition technology to detect if a student is struggling or successfully reading the passage. Children can also tap on Diyya at any time for help pronouncing a word or a sentence, Google noted.

Children are also rewarded with stars for accuracy and reading time with a child required to read for a minimum of 10 minutes every time they use the app. There are also three games available on the app for children to test their reading abilities as well as win more points. Parents can check their child’s progress on the app and receive reports with details of the past seven days.

Read Along keeps young minds engaged with a collection of diverse and interesting stories from around the world, and games sprinkled into those stories. Kids can collect stars and badges as they learn, which motivates them to keep playing and reading.

The app currently has a library of nearly 700 short stories in different languages, which are available to all users, with the Arabic language content initially to contain 40 stories. The average story length is between 275-300 words, and the longest contains more than 2,000 words.

The stories currently available have been read more than 31 million times, with almost five million hours of cumulative reading being recorded on the app, Google said. Besides reading, users can also play language-based games aimed at building vocabulary such as detecting jumbled words and recognising letters through sounds.

Parents can create profiles for multiple readers, who can tap on their photo to learn at their own pace and to keep track of their individual progress. Read Along will personalise the experience, by recommending the right difficulty level of stories and games based on their reading level performance.

As part of their commitment to promote reading across the MENA region, Google is also inviting budding authors between the ages of 5 and 11 to discover the magic of storytelling by writing and sharing their own stories.

The young authors have until 30 September for the chance to be published in multiple languages on global learning platforms like Read Along by Google, Global Digital Library, and Pratham Books Storyweaver. The winners will be announced in October.

The app has had a positive impact on children’s reading abilities, the company said. After using it for just 100 minutes, children who read at a speed of less than 45 correct words per minute saw an improvement of anywhere from 35% to 85% in their oral reading fluency.

Almost 100 million children between 5 and 17 years old in the Middle East and North Africa (MENA) region have experienced school closures since the start of the pandemic. Many are now forced to rely on alternative means of education, according to UNICEF.

Egypt offers its expertise in fighting against COVID-19