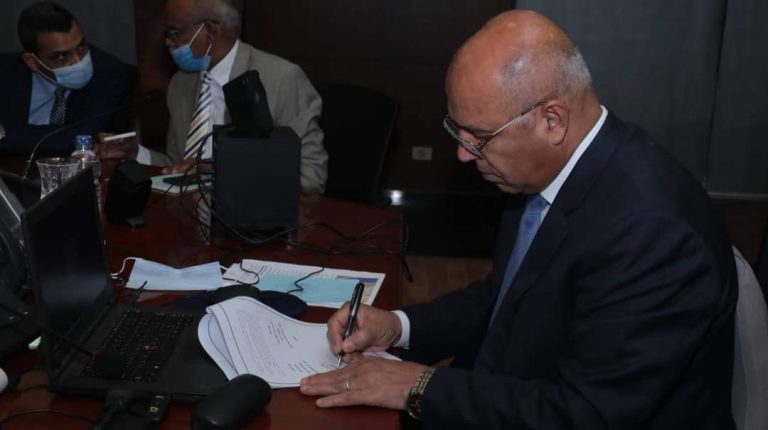 Egypt’s Minister of Transportation Kamel El-Wazir and his Sudanese counterpart Hashim Ibn Auf signed a cooperation agreement, on Sunday, that will see the construction of a cross-border railway connection between the two countries.

During a virtual meeting between the two sides, El-Wazir discussed ways of enhancing the joint cooperation in various transportation fields. The Egyptian minister handed the signed agreement to Sudan’s Ambassador in Cairo, Mohamed Al-Yas, in order for the agreement to be signed by Ibn Auf.

Both parties also reviewed the terms of the joint cooperation agreement, which aims to provide the necessary funding to start an economic, social and environmental feasibility study for the railway project.

The first phase will extend from Aswan in Upper Egypt to Wadi Halfa in the Northern state of Sudan. The project will be funded by Egypt, Sudan, and the Kuwait Fund for Economic Development.

The meeting also tackled a number of road projects, including studies into the implementation of a road linking Egypt and Chad through Sudan, which is set to be a gateway for trade between the three countries. The two ministers also discussed the Cairo-Cape Town Road that will pass through nine African countries.

El-Wazir said that Egypt is currently implementing the axis part inside Egyptian territories, as the Cairo-Cape Town Road will pass through the Egyptian governorates of Fayoum, Beni Suef, Minya, Assiut, Sohag, Qena, Luxor, and Aswan.

He asserted the road project’s importance for achieving land connectivity between African countries and increasing trade ways, as well as achieving comprehensive development.