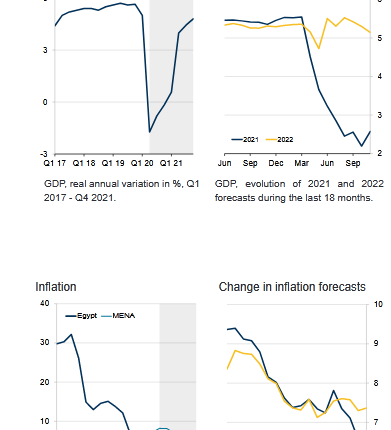 The latest figures for FY 2020/21 reflect a rise of 0.4% from last month’s forecast, and were revealed in Focus Economics’ latest consensus forecast for the Middle East and North Africa (MENA) region for November.

Focus Economics explained that in FY 2020/21, which runs from July 2020 to June 2021, the economy is projected to slow further. This has been attributed to the ongoing effects of the novel coronavirus (COVID-19) pandemic, and a weak external environment.

The economic consensus forecaster added that a continued contraction in exports is set to weigh heavily on overall growth, while decelerating private consumption and public spending should also contribute to the slowdown.

The economy contracted 1.7% year-on-year (y-o-y) in the fourth quarter (Q4) of FY 2019/20 (April–June 2020), according to estimates announced by Egypt’s Ministry of Planning and Economic Development.

The reading contrasted against the 5.0% growth recorded in Q3, and marks the first quarterly contraction since Q4 of FY 2010/11. This came as the full extent of the coronavirus-related containment measures enacted in late March pounded the economy.

“Looking at the details of the release, Q4’s result was driven by a mild downturn in domestic demand and a much larger contraction in the external sector,” Focus Economics said, “Domestically, capital spending capitulated, with fixed investment falling 56.2% in the quarter (Q3: -20.0% y-o-y), as widespread uncertainty hindered spending plans.”

Panic-buying in the wake of the announcement of lockdowns, strong remittance growth, mild inflation and the Central Bank of Egypt’s (CBE) substantial 300-basis-point rate cut in mid-March all likely played a part in the uptick in household spending, according to Focus Economics.

In the external arena, it mentioned that exports plunged 48.5% in annual terms in Q4, worsening from the 16.6% contraction clocked in Q3. Slumping demand in key international markets and a significant reduction in tourism figures likely weighed heavily on the quarter’s outturn.

Meanwhile, imports dived 24.7% in Q4, deteriorating from the 20.6% contraction recorded in Q3, reflecting both weakening domestic demand and supply chain disruptions as a result of widespread international lockdowns.

“Going forward, the downturn in GDP is projected to soften in the first half of FY 2020/21, before growth returns in the second half (H2),” Focus Economics said, “A recovering external environment should aid the improvement, as key international markets reopen following stringent lockdowns.”

It added that, despite a relatively low level of daily new COVID-19 cases domestically, the stubbornly high infection rate in Europe and the US presents a key downside risk to growth in FY 2020/21.

In terms of the inflation, the report mentioned that the inflation rose to 3.7% in September from 3.4% in August, likely reflecting an uptick in transportation costs.

The report mentioned that the CBE, in its most recent meeting on 24 September, cut the overnight deposit, overnight lending, and main operation rates by 50 basis points to 8.75%, 9.75%, and 9.25%, respectively.

“Interest rates are seen remaining close to current levels going forward as the Bank seeks to bolster economic growth and inflation,” the report said, “Our panellists project the overnight deposit rate to end CY 2021 at 8.55% and CY 2022 at 8.75%.”

On 30 October, the Egyptian pound traded at EGP 15.70 per US dollar, appreciating 0.4% compared to the same day a month earlier, likely on continued high real interest rates attracting foreign investment.

The report said that going forward, the pound is seen weakening somewhat, with the prolongation of the global pandemic a key downside risk to the outlook.

CBE to discuss fate of interest rate on Thursday