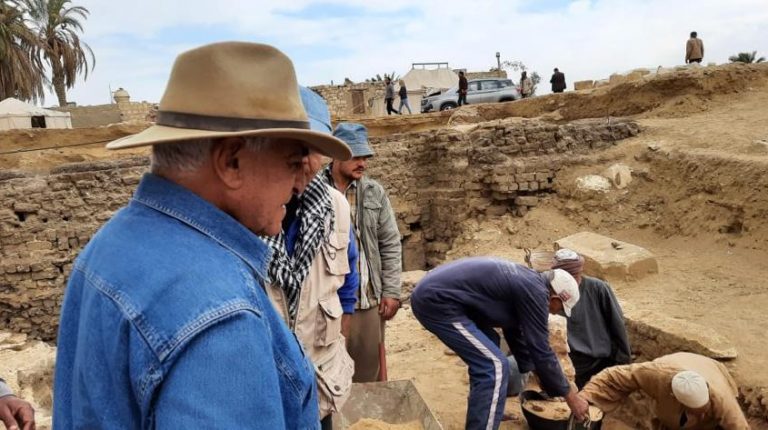 Egypt announced, on Saturday, the discovery of Queen Nearit funerary temple, the wife of King Teti, part of which has been already uncovered in the years prior.

The Egyptian mission working in the Saqqara archaeological site next to the Pyramid of King Teti, the first pharaoh of the Old Kingdom’s Sixth Dynasty, has announced several important archaeological discoveries dating back to the Old and New Kingdoms.

The mission is headed by Zahi Hawass, and works in cooperation with the Ministry of Tourism and Antiquities and Bibliotheca Alexandrina.

These discoveries will rewrite the history of this region, especially during the 18th and 19th Dynasties of the New Kingdom, during which Pharaoh Teti was worshipped. The mission has found evidence of other burials around his pyramid. The mission confirmed that the entrance to the Saqqara area in the New Kingdom was through this area.

It also discovered the layout of the Queen Nearit temple in which her tomb was located, as well as three mud-brick warehouses attached to the temple on its south-eastern side. These stores were built to store temple provisions, offerings and tools that were used in the queen’s tomb.

Among the most important discoveries at the site was the unveiling of 52 burial shafts that reach to 10-12 metres deep. Inside were hundreds of wooden coffins dating back to the New Kingdom, the first time that coffins dating back 3,000 years have been found in the Saqqara region.

The wooden coffins are anthropoid, and many feature scenes of the gods that were worshiped during this period represented on the surface. Additionally to this, various excerpts from the Book of the Dead were represented, to help the deceased pass through the journey to the other world. The discovery confirms that the Saqqara area was not used for burial during the Late Period only, but also during the New Kingdom. 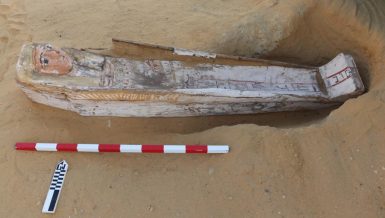 The mission succeeded in discovering an additional cache of anthropoid wooden coffins. Inside this shaft, 50 coffins were found in good condition.

It also uncovered a luxurious underground mud-brick shrine dating back to the New Kingdom, which was found 24m below ground level.

The open court of the shaft, the first one of this depth to be found, was paved with well-polished and shiny limestone slabs. Work is still in progress on the shaft, but Hawass believes that it did not suffer at the hands of thieves.

The discoveries found in the shaft are considered one of the most important findings uncovered in the Saqqara region.

This discovery confirms the existence of many workshops that produced these coffins, which were bought by the locals, as well as mummification workshops.

Inside the shafts, the mission discovered large numbers of archaeological artefacts and statues representing deities such as the god Osiris and Ptah-Soker-Osiris. This was in addition to a unique discovery, of a four metre long papyrus representing Chapter 17 from the Book of the Dead.

The papyrus has been identified as belonging to Pw-Kha-Ef, the same name found on four shabti statues, and on an anthropoid wooden coffin. Many beautiful shabti statues made of wood, stone and faience have been found dating back to the New Kingdom. 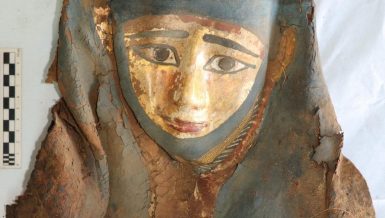 The mission also found many wooden funerary masks as well as a shrine dedicated to god Anubis (Guardian of the Cemetery, as well as statues of the god. Many games were found among the items, which belonged to the deceased and which they used to play in the other world.

Several other artefacts were found that represent birds such as geese, as well as a magnificent bronze axe, indicating that its owner was an army leaderduring the New Kingdom.

A wonderful and well preserved limestone stelae was found in one of the excavated shafts, it belongs to a man named Kha-Ptah and his wife Mwt-em-wia.

The upper part of the stelae represents the deceased and his wife in an adoration gesture in front of god Osiris, while the lower part represents the deceased sitting and behind him his wife seated on a chair. Below the chair of the wife there is one of their daughters sitting on her legs and smelling the lotus flower, and above her head is the ointment flask.

In front of the man and his wife can be seen six of their children who were depicted in two registers. Viewers can see an upper one for seated daughters smelling the lotus flowers, with ointment flasks above their heads, and the lower one for standing sons.

What grabs the attention is that one of their daughters bears the name Nefertary, named after the beloved wife of king Ramses II, who built her a marvelous tomb at Valley of the Queens as well as a temple at Abu Simbel.

In addition to that, one of Kha-Ptah’s sons was named Kha-em-waset, named after one of the sons of Pharaoh Ramesses II. He was considered a wise man, and known as the first Egyptologist, who used to restore the antiquities of his ancestors.

As for the titles of the owner of the stela, he was the overseer of the king’s military chariot, which indicates his prestigious position during the 19th Dynasty.

The mission also found impressive quantities of pottery dating back to the New Kingdom, including pottery that gives us evidence about the commercial relations between Egypt and Crete, Syria, Palestine.

Sahar Selim, a professor of radiology at Qasr al-Aini, conducted studies on mummies using X-ray, and determined the causes of death and the age of the deceased on death, as well as studying a mummy for a young child.

Afaf, an archaeologist specializing in the study of bones, studied the mummy of a woman and determined that this woman suffered from a chronic disease known as “Mediterranean fever” or “swine fever”, a disease that comes from direct contact with animals and leads to an abscess in the liver.

Hawass confirms that this discovery is considered the most important archaeological discovery during the current year and will make Saqqara, along with other discoveries, an important tourist and cultural destination. It will also rewrite the history of Saqqara during the New Kingdom, in addition to confirming the importance of the worship of King Teti during the 19th Dynasty of the New Kingdom.

26th Aswan Sculpture Symposium postponed to 2022 due to COVID-19

Egypt among 21 destinations recommended for 2021: CNN

Major archaeological discovery at Saqqara to be revealed in January: Egyptologist