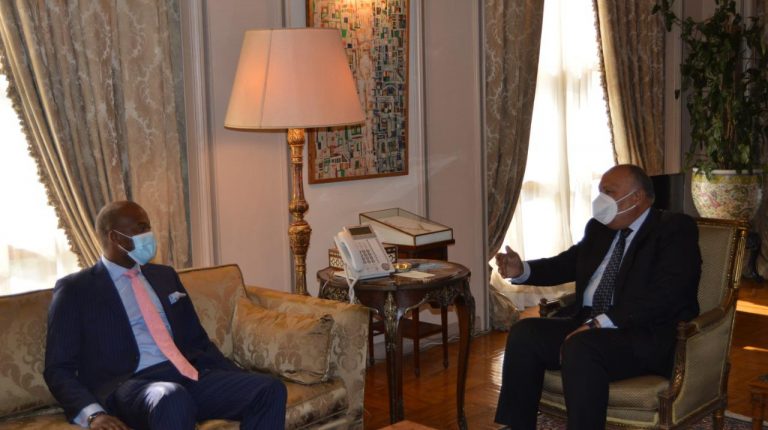 Foreign Ministry Spokesperson Ahmed Hafez said that, during the meeting, Shoukry expressed his appreciation for the AfCFTA Secretary-General’s visit to Egypt, as one of his first foreign trips after the agreement’s launch on 1 January.

Shoukry also praised Mene’s keenness to consult with the Egyptian side and listen to its vision on issues related to the agreement.
Hafez said that the Minister noted the great importance Egypt attaches to the success of the AfCFTA agreement. He highlighted that the announcement of the agreement was made during Egypt’s African Union (AU) presidency in 2019.

Shoukry also noted that Egypt was one of the first countries to sign and ratify the agreement.

He added that the Minister of Foreign Affairs affirmed, during the meeting, that Egypt is fully prepared to provide all forms of support to the AfCFTA secretariat. In doing so, it aims to contribute to the success of its work, carry out its responsibilities, follow up on the implementation of the agreement, and the success of its remaining negotiations.

This will take place in a manner that achieves the required economic integration within Africa as a major step in establishing a united cross-continent market.

Hafez said that Mene affirmed his keenness to continue coordination with the Egyptian side, and provide continuous updates on the progress made in the ongoing negotiations for the next stages of the Agreement.