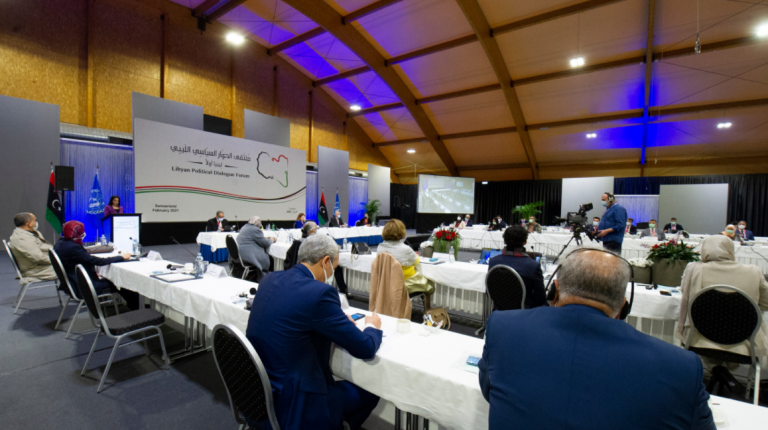 Libya’s rival parties met, on Monday, in the Swiss city, Geneva, to choose a new interim Prime Minister and the three members of a presidency council, raising hopes to end the long-time crisis in the country.

The Libyan Political Dialogue Forum (LPDF) is to be held in Switzerland from 1 to 5 February, with the participation of 75 representatives from all Libyan parties. The officials will be expected to elect the new temporary unified executive from a list of 45 officials.

In order for parliamentary elections to be held in December 2021, a new and reformed Presidency Council must be formed, along with an effective and unified Government of National Unity (GNA).

The list of candidates for the position of Prime Minister, shared by the United Nations (UN) on Saturday, includes influential official Fathi Bashagha, who currently serves as the Government of National Accord’s (GNA) Interior Minister.

The candidates for the Presidency Council includes Aguila Saleh, Speaker of the Libyan Parliament.

During the Geneva meetings, the UN said it “will invite all candidates for an interactive session with the LPDF members, to allow the candidates the opportunity to lay out their vision on implementing the Roadmap agreed upon by the LPDF”.

“I will ask you to work hard, and to work together, as you have done so well since our meeting in Tunis,” said acting UN Libya envoy Stephanie Williams in her opening remarks at the LPDF on Monday, “Indeed, I ask you to uphold the same spirit of cooperation, fraternity, integrity and love of nation that you have shown throughout this process.”

She said that the participants have to “put an indelible mark on the calendar for the holding of national elections on 24 December of this year”.

Williams added that reaching this far and achieving this progress in the political dialogue has been an arduous journey fraught with challenges, many of which the LPDF has managed to overcome with its wisdom and remarkable persistence.

Since the fall of its former leader Muammar Qaddafi in 2011, Libya has undergone years of conflict. The oil-rich country has been split between two parties since 2014, the Government of National Accord (GNA) in Tripoli, and the Libyan Arab Armed Forces (LAAF) in Benghazi.