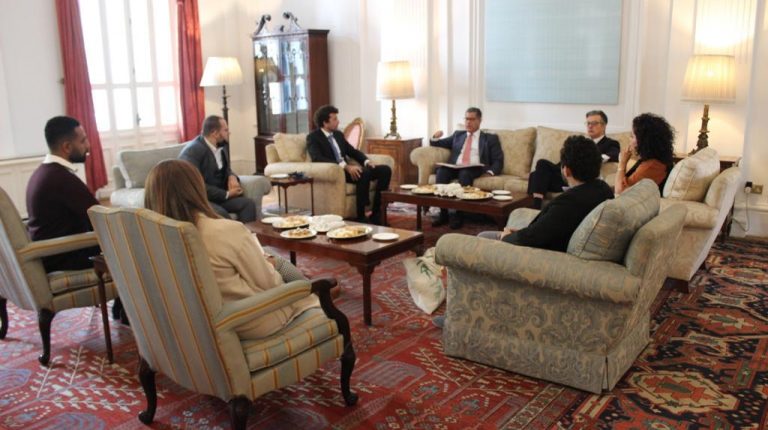 President of the United Nations Climate Change Conference (COP26) Alok Sharma, who previously served as Business Minister in the UK, has met with senior government officials and civil society representatives in Egypt to discuss how both countries can work together to address climate change challenges.

In his first visit to Egypt since assuming his position, Sharma sat down with Prime Minister Mostafa Madbouly, Minister of Environment Yasmine Fouad, Minister of Electricity and Renewable Energy Mohamed Shaker, Minister of Finance Mohamed Maait, and Central Bank Governor Tarek Amer. Other attendees were Deputy Foreign Minister Hamdi Loza and Mohamed Gad, Director of Environment and Sustainable Development at the Ministry of Foreign Affairs.

COP26 President stressed the need for urgent climate action plan and discussed Egypt’s and UK’s priorities when it comes to environmental sustainability. He also explored the different opportunities to increase bilateral, regional and international cooperation on the climate file and reaffirmed the UK’s commitment to International Climate Finance (ICF), helping the most vulnerable, and pushing other donors to increase their financial contributions.

The meetings also covered the important inter-governmental work ahead to ensure that COP26 is a success, and delivers concrete outcomes in the areas of mitigation, adaptation and means of implementation. The discussions also touched on the need to support avenues of cooperation between COP26, hosted by the UK, and COP27 which is set to be hosted in Africa, and which Egypt has formally announced its bid to host.

For his part, Prime Minister Madbouly affirmed Egypt’s keenness to cooperate and coordinate with the UK to ensure the success of COP26, scheduled to be held on 1-12 November 2021 in Glasgow.

Madbouly also praised the cooperation between Egypt and the UK in the field of climate adaptation, and the joint leadership of the two countries on the Adaptation Action Coalition launched last month, which will turn international political commitments made through the United Nations Call for Action on Adaptation and Resilience into on-the-ground support for vulnerable communities.

Sharma said, “I was delighted to visit Egypt and meet with His Excellency Prime Minister Madbouly and other senior government ministers and officials to talk about increasing joint cooperation ahead of COP26. It was also good to talk with civil society organisations committed to tackling climate change. Egypt is a key player in the region and by leading the way towards a greener future, Egypt can influence other countries in joining our Adaptation Action Coalition and create a safer, healthier and more prosperous environment for our children and future generations to come.”

British Ambassador to Egypt Sir Geoffrey Adams said, “Mr Sharma’s first visit as COP26 President to Egypt is a clear sign of the importance the UK places on climate change as a top priority for both countries. Egypt plays a pivotal role in the region as well as globally on climate change mitigation. We are keen to strengthen our partnership, building on the visit’s success and our united call for action on climate adaptation and resilience.”

This visit follows a series of other visits Sharma is conducting across Africa ahead of COP26, underlining the UK’s commitment to championing adaptation and action to minimise and address loss and damage from climate change.