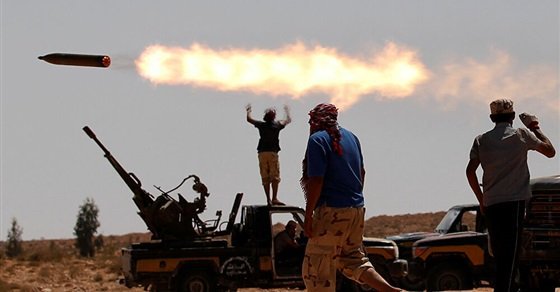 Libya is experiencing new developments that may accelerate the approaching end of the divisions that have plagued the country during the past years, due to various conflicts.

Both war and the introduction of foreign mercenaries have only increased the conflict, after the previous Tripoli government signed Memoranda of Understanding (MoUs) with external forces. Most Libyans see these as occupation forces, in light of the ambitions of Turkey’s President Recep Tayyip Erdogan, who has reiterated on more than one occasion, the continued presence of his elements in Libya.

The meeting that brought together Mohammad Yunes Menfi, head of the new Libyan Presidency Council, who visited Benghazi and met with Commander Khalifa Haftar, Head of the Libyan Arab Armed Forces (LAAF), have largely been positive.

Most Libya observers have agreed that ending the state of division will not actually take place without presenting actual, rather than verbal, steps by Menfi, along with government head Abdel Hamid Al-Dabaiba. These would need to prove that they do not agree with the approach of their predecessors.

The new government should transfer the financial allocations spent on mercenary militias to the disrupted services in the country, which have paralysed the lives of citizens. These disruptions have occurred due to the lack of financial liquidity in banks and the disruption of many services.

The issues have been driven largely by the growing repercussions of the novel coronavirus (COVID-19) pandemic.

The new government also needs to announce a quick time plan to expel the Turkish militias, and return to the national ranks.

In this regard, Daily News Egypt turned to experts on Libyan affairs to summarise the challenges of the next stage, and the steps that must be taken to make the transitional stage a success.

At the outset, Libyan political analyst Abdel Hakim Maatouk said that the results of the Libyan Political Dialogue Forum (LPDF) that recently took place in Geneva are positive. The forum resulted in the presence of a new executive authority in the country to take over the tasks of a transitional phase.

However, the experiences and lessons that the Libyan state has gone through since 2011 should not make us rush to make judgments, or reach conclusions before the introductions begin on the ground.

Maatouk added that the Geneva agreement was not an election, but rather a consensus session between political parties composed of 75 people. A road map was drawn up with the Presidential Council and the presidency of the expected government.

He pointed out that the results of the Geneva discussions are closer to the process of cloning all the people who have been in the scene since 2014. Although many Libyans have reservations about it, it seems that the United Nations (UN) and its successive missions have insistence on this front, and that there is a real desire from the influential parties in Libyan society to show the spirit of serious and real cooperation.

“In Geneva, they went to the individual option in the voting process to select the President of the Presidential Council and the Prime Minister, and they failed in it, because the percentage of winning the vote was very high, 70%, which no one managed to do,” Maatouk said. “Then they turned to the second option, which is the lists based on alliances, pressures, and allegiances.”

Maatouk noted that there were strong and realistic indications that the list represented by Aquila Saleh, Speaker of the Libyan Parliament, is the closest to victory, as they represent the forces striking on the ground. However, a list represented by Menfi and Al-Dabaiba was a surprise to all observers.

In any case, the current list succeeded according to the criteria adopted, ensuring that a government could be formed. The question now, however, is whether this government will succeed in ending the dispute between Libya’s eastern and western areas? This is a question that will be answered when confidence is granted by Parliament.

“I think that Parliament, supported by national forces and tribes, does not want to grant confidence in this way without demanding the departure of Erdogan’s mercenaries,” Maatouk said, “That is why I do not imagine that it will easily grant confidence to the government, and if it does not grant confidence and entrust the task to the 75th Committee, this means that we repeat the mistake of the Sokhirat government as an unconstitutional government.”

He added that the Skhirat government did not obtain confidence, and instead of bringing peace, it brought a fierce war to the country. It also spent billions of US dollars without account or control while inviting mercenaries into Libya, before handing over the reins of power to a group of people with different problems.

“As we have seen, the Turkish president made contacts with the Head of the Presidency Council, Mohammad Menfi, which was followed by contact with the Prime Minister,” Maatouk said.

Official statements from Ankara confirmed that the Turks will remain in Libya, a proposal entirely rejected by the Libyan people. This rejection comes especially in light of there being a Security Council resolution that the Turkish mercenaries should leave to clear the air, because their stay will cause a problem.

But to meet these objective conditions, Al-Dabaiba must agree with these popular demands that the mercenaries should leave Libya in order to implement Security Council resolutions, whilst presenting MoUs to the House of Representatives.

In this case, the Haftar-led LAAF will accept, in a real and serious way, that it is under the authority of the Presidency Council.

Regarding the most prominent current challenges, Maatouk said, “The difficult humanitarian situation in which the Libyans live, improving the living situation in relation to financial liquidity that is no longer available in banks, achieving and returning security and safety, trying to create a space for societal reconciliation, and working on a constitutional basis.”

“The remaining nine months before the national elections should be extended to a year and a half, so that they can at least provide the minimum requirements for the citizen,” he added, “They should also set a constitutional rule, for the elections to be held in December and may be carried over to June 2022.”

Ahmed Abdel Alim, a political researcher and specialist in Libyan affairs, said that the outcomes of the Libyan dialogue in Geneva represented an important step.

He noted that the unexpected results could be interpreted as a punitive vote mainly for the symbols of the Libyan conflict.

Abdel Alim also said that it is important to point out that elections are internally welcomed in Libya, which can be described as a “rare compromise” between East and West. Both the Tobruk Parliament and the LAAF’s General Command have given their support to the results of the Geneva Dialogue outcomes.

This coincided with Prime Minister Fayez Al-Sarraj’s Government and the High Council of State supporting these results as well, which is one of the most prominent positive repercussions that occurred in the past few days.

On the fate of the agreements signed by the Al-Sarraj government, Abdel Alim said that these agreements are illegal. This covers both the maritime agreement that was met with regional and international disapproval, as well as the security agreement that tried to legitimise the suspicious Turkish role in western Libya, and which was also disapproved of.

The latter agreement was based on the refusal of the Tobruk Parliament, which is the only legitimate body that can grant legitimacy to any agreements made by the government.

Abdel Alim said that Turkey seeks to consolidate its gains and its influence in western Libya, and it will deal flexibly with the new government until the elections next December.

“I think the Turkish role will continue to exist naturally, especially in light of the strong relations between the Prime Minister Abdul Hamid Al-Dabaiba, who comes from the city of Misurata,” Abdel Alim said, “This was reflected in the great Turkish welcome of the results of the Geneva elections, as well as Al-Dabaiba’s confirmation on 7 February that Turkey is a “partner and ally” of the Libyans.”

Regarding whether Haftar’s forces are able to formally engage under the new command of the Presidency Council, Abdel Alim said, “I think it is a very sensitive issue, especially since the National Army has welcomed the election results and is still controlling the largest proportion of Libyan territory.”

He added, “Thus, there will be a margin of movement for the new government in order to try to unify the army and exclude militias from the security scene, which will become clear in the coming days.”

Abdel Alim pointed out that there are four challenges facing the current Libyan scene, the first being the foreign mercenaries deployed in the country, whose number was estimated by the United Nations at about 20,000 mercenaries.

The second challenge is dealing with the militias, especially in Tripoli, some of which threatened to reject the Geneva outcomes, especially as these militias have wide influence in the western regions.

The third challenge is related to dealing with influential figures such as Interior Minister Fathi Bashagha, who is supposed to leave his post. The fourth challenge is the ability to deal with the outside.

Regarding the completion of the transitional phase on time by the end of this year, he said that this depends mainly on addressing the aforementioned challenges, especially with regard to the proliferation of mercenaries and militias. The more the new executive authority is able to take the necessary actions towards these challenges, the more access opportunities will be enhanced.