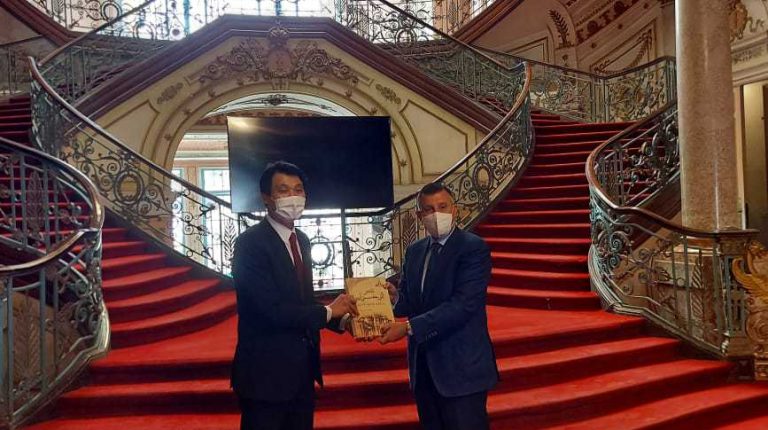 South Korea’s Ambassador in Cairo Hong Jin-wook paid an official visit to Ain Shams University, on Tuesday, where he held a meeting with the University’s President Mahmoud El-Meteini.

During the meeting, the two sides discussed ways to expand cooperation in higher education between the Embassy and the University, which is home to one of two Korean language departments in Egypt.

Ambassador Hong noted that Ain Shams University is one of the top three national universities in Egypt with a number of distinguished Faculties including the Faculty of Al-Alsun (languages).

The university’s Al-Alsun which is spearheading Egypt’s globalisation as a leading interpretation and translation education hub, with 14 departments offering 18 language courses.

The Ambassador particularly praised the university’s Korean language department, established in 2005 as the first such university programme in the Middle East and Africa (MEA) region.

Since its establishment, the department has played a pivotal role in introducing Korean studies in the region, and has served as a catalyst for promoting mutual understanding between Korea and Egypt.

Hong noted the continuous inflow of top elite students enrolled in the Korean language department. It reflects not only the Egyptian young generations’ love for Korean culture and language, but also its great potential for future employment opportunities.

He also appreciated the excellence of around 300 graduates who have so far graduated from the department and who are now employed in various sectors.

The Ambassador said that they present an outstanding knowledge of Korean culture and language, which is especially recognised by Korean business representatives in Egypt.

Hong and El-Meteini discussed how to further develop the university’s Korean language department as an icon of educational cooperation and nurture the students as the future diplomatic assets for two countries.

They also sought ways to explore the bilateral cooperation between two countries’ universities in the field of global affairs and international business.

In-person classes to continue at all universities in Egypt: Official

Opinion| Korea-Egypt partnership to continue for another 15 years