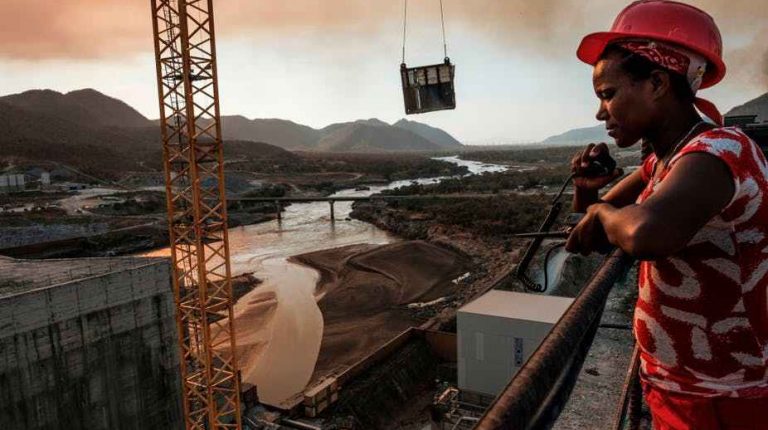 During the celebrations for the restoration of global trade movement in the Suez Canal after the end of the trapped ship crisis, Ever Given, Egypt’s President Abdel Fattah Al-Sisi delivered a decisive statement that does not tolerate any other explanation.

I mean here his statement about the Grand Ethiopian Renaissance Dam (GERD) negotiations, when he said, “We do not threaten anyone, but no one can take a drop of water from Egypt. Otherwise, the region will witness a state of instability that no one could imagine. And whoever wants to test us, let him please.”

He continued, “No one should think that he can be untouchable.”

The message is crystal clear, and we are not here to talk about comparisons between the military, technical, and economic capabilities between the two countries [Egypt and Ethiopia], as they are known and understood by everyone.

I believe that this statement does not require any comment, and every sane person can understand it. He must also, however, bear the consequences of this understanding, positively or negatively, especially if the other party is limited in ability and perhaps understanding.

In the past, they deceived us and said that this person sitting in Ethiopia, the country’s Prime Minister Abiy Ahmed, seeks stability and peace. Even worse, the Nobel Foundation awarded him the Nobel Peace Prize, claiming that he had made tremendous efforts to restore security and peace in the Horn of Africa.

But this week all those lies dispelled after Ahmed admitted for the first time the presence of Eritrean forces in the Ethiopian Tigray region, after the outbreak of conflict there last November.

In this regard, Ahmed told the Ethiopian parliamentarians that the Eritrean forces came for fear of being attacked by the Tigray People’s Liberation Front (TPLF) fighters. He added that he had spoken to Eritrean officials about allegations that Eritrean soldiers had committed atrocities in Tigray.

The AFP quoted him as saying, “After the Eritrean army crossed the border and was operating in Ethiopia, any harm to our people is unacceptable.” He confirmed this saying also through his Twitter account, “Reports indicate atrocities were committed in the Tigray region.”

This statement carries in its content an official recognition of Abi Ahmed’s responsibility for the humanitarian crimes committed by the Eritrean forces against the region’s residents, especially as he was the one who requested support from the Eritrean forces to assist his forces in controlling the rebellious region.

According to reports issued by the UN, five medical clinics in the Tigray Region recorded more than 500 rape cases, warning that due to the stigma attached to the matter and the lack of health services, the actual number of cases is likely to be much higher.

Here, a very important question arises: What is the fate of the Nobel Peace Prize awarded to Ahmed after this recognition, and is it conceivable for that award to be awarded to a person involved in crimes against humanity?

It appears that the man does not believe in what he writes, as the decision to go to war in Tigray that he made contradicts his doctoral thesis centred on conflict resolution. In this, he wrote, “Violence should not be fought only with reactionary tools.”

He added that to resolve regional tensions and turmoil, the structural causes of “intolerance, social marginalisation and economic disparity must be addressed.” Strangely, Ahmed won the Nobel Prize for Peace as a result of allegations that he made great efforts to end the conflict with Eritrea, and it seems that the latter, I mean Eritrea, wanted to pay the bills for this peace by providing the necessary support to the Ethiopian army in Tigray.

The war crimes that happened in this region expresses Abe’s personality, which is characterised by tribalism and a desire to avenge the nationalism of the Amhara and all the tribes of the south to which he belongs, from the Tigrayans who practiced numerous crimes against the opposition tribes during their domination of the federal power in the country.

This will not be the first time that the Nobel Foundation has been subjected to criticism as a result of the evaluation of one of its prize winners, as this matter happened to US President Barack Obama, who won the 2009 Peace Prize, when his country was at that time involved in two wars in Iraq and Afghanistan.

The leader of Myanmar Aun San Suu Kyi, who received the award in 1991, and the Nobel Committee refused to withdraw the award from her after the publication of a UN report in 2018 which stated that the Myanmar army had committed genocide against the Rohingya Muslims.

This contradicts the recommendations of the Prize’s founder, Alfred Nobel, which states that “the prize should be awarded to more or better work for the elimination or reduction of weapons, and the achievement of brotherhood between peoples and peace”.

It seems that the international community and those in charge of Nobel were quick to award Ethiopia’s Prime Minister the prize, because it is only given to personalities who have proven their determination in their humanitarian and political stances.

It covers those who have adopted them and have been able to achieve change internally and externally, and not to people like this man whose fate will be like other war criminals in the world who are wanted to be tried internationally before the criminal court.