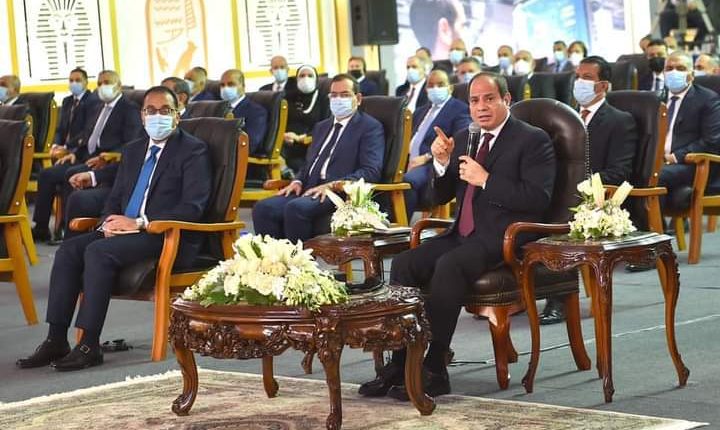 Egypt’s President Abdel Fattah Al-Sisi asserted, on Wednesday, the justice of his country’s water cause, and that comes in accordance with the norms of international law.

Speaking on the Grand Ethiopian Renaissance Dam (GERD) issue, Al-Sisi stressed that Egypt has not changed its position, and expressed his country’s respect for Ethiopia’s development project.

“We respect the desire of other countries to achieve development, provided that it does not affect Egypt’s share of water,” he asserted.

Al-Sisi said that Egypt is putting its efforts to not losing a drop of water, stressing that work is underway on water treatment projects for use in cultivating millions of agricultural acres.

“I have been worried about Egypt’s water resources since 2011,” he added, “We prepare ourselves well and do not throw our burdens on others.”

Whilst noting that Egypt must benefit from every drop of water, Al-Sisi directed his speech to the people of Ethiopia, saying, “We should not reach the stage of compromising a drop of Egypt’s water, and our cooperation is better.”

“I assert to our brothers in Ethiopia that all options are available,” he said.

He explained that God had sent rain to Ethiopia and provided hilly lands for the water to reach Egypt, affirming that what God wants will not be changed by humans.

The President said that Egypt will invest in any project that maximises the use of water, regardless of its cost. He added that his country will operate 15 water pumping stations, along with the use of treated wastewater, for use in irrigation and agriculture.

Sudan’s Minister of Irrigation Yasser Abbas said, on Wednesday, that all options remain open to solve the Ethiopian dam crisis, including resorting to the UN Security Council and international community.

In a statement, Abbas said that Khartoum will maintain its position of negotiating in good faith and adhering to the principles of international law, stressing that the effects of the Grand Ethiopian Renaissance Dam (GERD) on Sudan are direct and significant.

He also said that the African Union (AU) monitors will not be given any role in the negotiation process on the huge dam project. Ethiopia has objected to various proposals put forward by Sudan and Egypt, with Abbas noting that the failure to reach a fair agreement threatens regional peace and security.

Egypt’s Minister of Foreign Affairs Sameh Shoukry headed to Khartoum, on Tuesday, accompanied by a Sudanese delegation coming from the Democratic Republic of the Congo (DRC).

Shoukry said, “Cairo will act if any water damage is caused to it by the Ethiopian dam.”

He added, “Egypt is always working to solve the dam crisis politically, and it will take all measures to protect its national security at the appropriate time.”

The Ethiopian side tried to disavow any commitment regarding a dam, adding that despite Egypt and Sudan’s flexibility, Ethiopia has thwarted these efforts, Shoukry also said.

Earlier, the Egyptian Ministry of Foreign Affairs said that the GERD negotiations held in DRC capital, Kinshasa, had neither achieved progress nor reached an agreement on re-launching the negotiations.

It also indicated that Ethiopia rejected the proposal submitted by Sudan and supported by Egypt on forming an international quartet led by the DRC.

Wastewater is only water source that increases as population grows: Regional IWMI Head